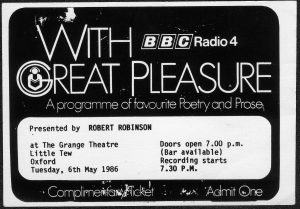 Once again we welcomed BBC Radio to take a recording of this then-popular show. As with the previous time, the recording lorry arrived at the house, we helped the techies (different ones now so once more we enjoyed watching the reactions from professionals as they saw the theatre for the first time!), and abided by the Beeb’s rules regarding distribution of the invitation-only free tickets and refrained from sneaking photos. Oh, and it was quite nice to meet the stars, too (although I must admit that the presenter, Robert Robinson, was rather distant with us commoners!)

The Programme was aired on 30th December 1986. The listing within the Radio Times can be found here

Grange Theatre stalwart Andrew Jenner devoted a considerable amount of his time to produce this listing of every single person who was ever involved in supporting the productions at the Grange, either on- or off-stage.
Thank you Andrew!