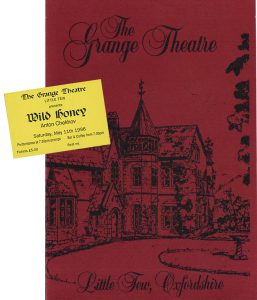 Wild Honey is a 1984 adaptation by British playwright Michael Frayn of an earlier play by Anton Chekhov.  The original work was a sprawling five-hour drama from Chekhov’s earliest years as a writer, found languishing in a drawer with no title, and is usually known in English as Platonov, after its principal character Mikhail Platonov.

Wild Honey was an extremely ambitious play to attempt, but with an excellent cast and skillful staging it was a triumph.  Val chose the play to celebrate the twenty-fifth year of the Grange Theatre.  One of the several challenges for the small stage at the Grange Theatre was the necessity to realistically conjure up the effect of an onrushing train, brilliantly made possible by Fred’s ingenuity and slight-of-hand, splendid sound effects as the train appeared to roar through the auditorium, smoke and even disappearing train’s tail lights.  The illusion was most convincing and greatly enjoyed by the audience.

The central character, Platonov, is a disillusioned provincial schoolmaster who has it all: wit, intelligence, a comfortable and respectable life in provincial Russia, and the attentions of four beautiful women – one of whom is his devoted wife.  Summer arrives and the seasonal festivities commence, as the rapidly intensifying heat wakes summer fervour after the long winter hibernation.  Fireworks, vodka, passion, all laced with humour….  As the play progresses, there is a heightened mood, tragicomic moments and streaks of wild absurdity, while celebrating its unevenness as a virtue.  There are moments in the drink-sodden night-time act, when the characters prowl around the woods, with Platonov battling the attentions of four women, that come close to Whitehall farce. Yet amid all this, Frayn manages to draw out the bitter self-awareness that is the torment of so many Chekhov characters. “Why do we never lead the life we have it in us to lead?” cries one.

As Platonov’s complicated life disintegrates he feels he is left with no option but to end it all and does so spectacularly under the wheels of the oncoming train. 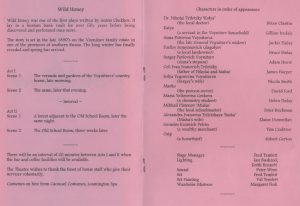 After the relatively ‘easy’ ride of the several recent productions this one really tested our metal. For the cast, maintaining the intense atmospheres and tensions of the plot demanded high concentration but it’s safe to say that the technical side of the show presented the technical crew with problems we had never faced before.

Imagine; on our tiny stage Fred had to build a realistic railway line (complete with sleepers) which had to vanish into a tunnel. Worse – a train, yes a train – would pass along it from the auditorium, run over an unfortunate person on the line, and then sweep into the dark tunnel with its red tail lamp disappearing in a cloud of steam.

Okay, first build your track (tick). Then build your tunnel (tick). Then arrange for the steam and tail lamp to work in close conjunction with each other (tick). Then source suitable sound effects (fx) for the train (tick) and an apparently moving headlamp for the front of the engine (tick).

Our lovely actor Peter Buckman was the poor schmuck doomed to meet his end under the train’s wheels (no tick!) In fact the entire scene was very, very carefully timed such that as Peter delivered his  lines (is that a pun?) leading up to his demise, the fx of a distant, approaching express would be heard at the back of the auditorium. The stage lighting – already quite dim – would fade more as he stumbled onto the track  (still declaiming his lines) whereupon the engine’s headlamp would grow brighter and brighter, rocking about as it approached.

With a piercing screech of the whistle and a blinding flash of the light the engine would be upon him: sudden blackout leaving just Peter’s body sprawled on the rails while, behind him, the red tail lamp swung out of sight into the curving tunnel* and was lost in the steam as the sound of the express dwindled to silence.

Can you imagine the problems we had? The train fx had to begin at precisely the right place in the script so that the climax of its passing would exactly coincide with the correct lines spoken by Peter; the swaying light of the locomotive would likewise have to be timed to a nicety and – most importantly – Peter had to act his little heart out and bring his lines to the precise word at which the director needed him to be hit by the express so that sound, light and action all combined at the correct dramatic moment.

We did it, of course . . . but there were times in rehearsal when we really doubted ourselves. Peter, with his wonderful and laconic sense of humour, would take the stress out of many mis-timings (the fx began too late or too early – and don’t forget, we could hardly pause the sound to try and come back to time, so  the train might arrive, pass by and disappear while Peter was declaiming earlier lines; the smoke machine would erupt at the wrong time; sometimes the headlamp didn’t wobble enough (a follow-spot at the back of the auditorium was connected via a long piece of fishing twine to the operator’s hand whose gentle tugging movements would rock the light – but not too violently otherwise we ran the risk of blowing the blessed bulb); sometimes Peter himself – especially early on – struggled to gain the sense of pace needed for him to maintain dramatic integrity while also keeping an eye and ear on the approaching train, and that blessed red tail lamp would also misbehave.

All the above was a] very frustrating to orchestrate; but b] thanks to Peter, became sometimes quite hilarious. If everything fell apart and the moment in the script arrived at which the train should rush past, Peter would throw himself violently upon the tracks no matter at what point the smoke, headlamp, steam or tail light might happen to be! Many were the stops and starts as close-timings were analysed and corrected but, eventually, we overcame the problems and everything came together in what the audiences all agreed was a most realistic and dramatic climax to the scene.

And the worst thing about it all? Not one photograph exists of the set to show the railway line and tunnel. The action took  place stage-left, the track commenced at the apron’s edge, ran upstage and disappeared into the tunnel’s mouth (actually the aperture of the kitchen door) before curving right to pass out of sight. It was in full sight and well-lit prior to the end of the scene and its quality and realism was praised by all who saw it.

I think we all lost pounds of weight on that show . . .

* Peter Wroe (on sound) has reminded me of another happening that reduced all who were involved with it into helpless laughter during rehearsals; how to operate the swinging tail lamp.

Space in the kitchen was ‘tight’ to say the least. Although it was easy enough to suspend a red lamp from an articulated horizontal arm hinged so that its travel arc allowed the lamp to be quietly swung into place during the action when the stage was much darker and the audience would be hopefully concentrating on Peter Buckman’s heroic acting (remember, it couldn’t be visible during the lead-up to the climax, when the lighting was normal daylight) and then moved through about 250º, the speed of swing had to give the impression of a rapidly-moving train.

During the technical discussions focussed on this problem Fred suddenly announced that “somewhere in the house, old boys, I’ve got a three-phase  bed-lifting electric motor”.

Cue the search, which eventually produced said motor. We wired this cumbersome thing up, attached the lamp’s arm, threw the switch and were not only deafened by the heavy-duty whirring of the beast, but also underwhelmed by the lamp’s painfully slow progress round its arc. No, Fred, not a good idea.

Eventually two problems were solved in one fell swoop. Ian Bushrod, a member of the stage crew, was “elected” to lie on his tummy just out of sight round the corner of the kitchen door (a.k.a. tunnel entrance) armed with the rather hot business-end of a stage smoke machine and the piece of string attached to the moving lamp.

Because the smoke machine had only a limited operational window (its electric element heated a powder, producing white vapour which was then blown down a flexible tube, and thus had to be switched on at a precise moment in the script in order to be ready on cue), Ian had to set it going, wriggle into position, push the rear lamp out in the darkness as the train was approaching, and then – at exactly the right moment that the lamp was illuminated remotely – release the pent-up smoke from its tube and gently pull the red lamp through its arc; then, finally, disarm the smoke machine. All the above while lying on his capacious tummy and using all three – or was it four – of his arms to operate the sequence!