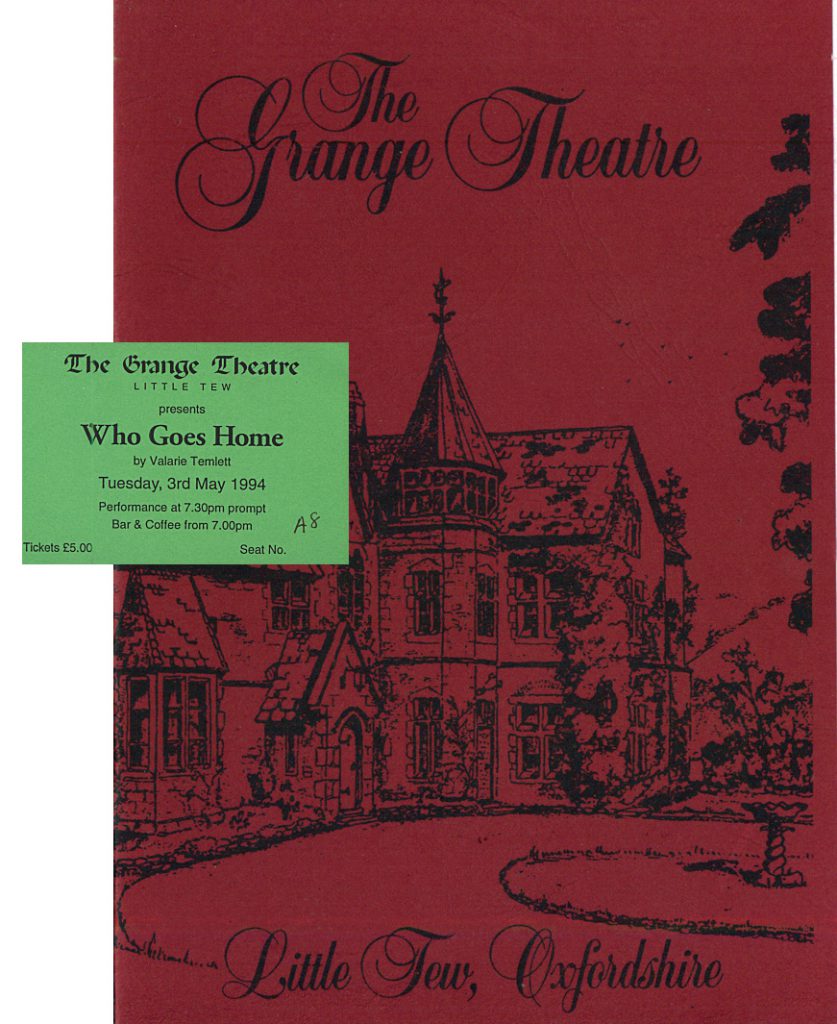 (Those horrid luddites in the control room preferred their name for the show – Hugo’s Home!)

The title of the play written by Val comes from the shout by policemen each night when the House of Commons rises, throughout the Palace of Westminster “Who goes home?”, a relic of the days when Members of Parliament were escorted safely to their beds.  Val obtained special  permission to be allowed to quote passages from Disraeli’s own letters which she was able to weave into the script of the play.

Synopsis of Who Goes Home? 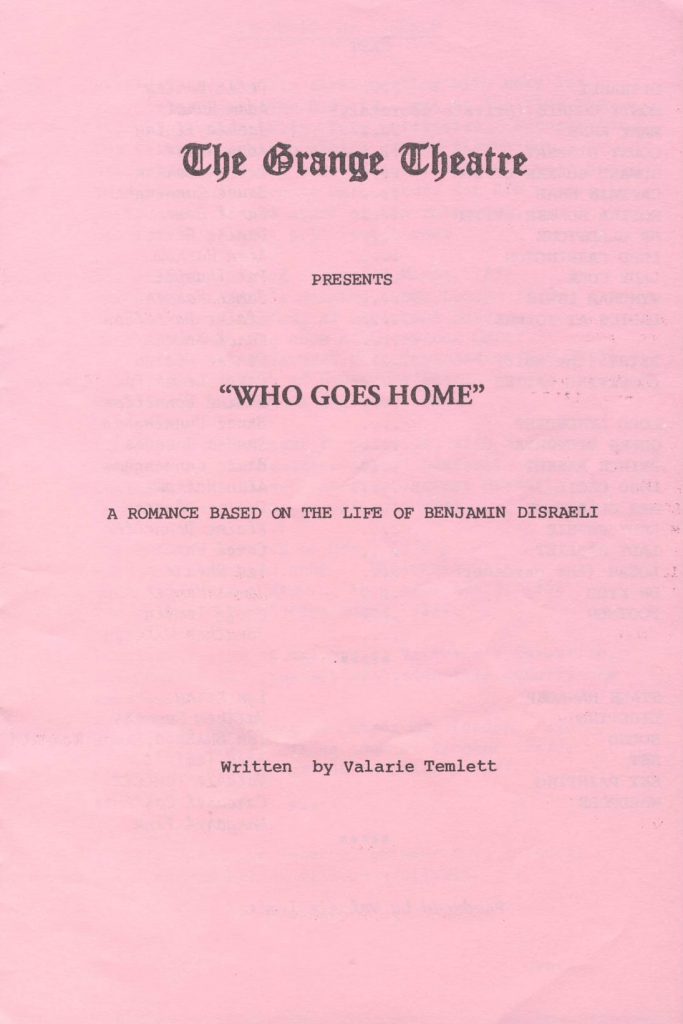 Disraeli recalls his first meeting with Mary Anne Wyndham Lewis at a soiree at Bulwer Lytton’s house on 27 April 1832.  She was 12 years his senior and was married to one of his parliamentary colleagues, Wyndham Lewis.  In his words: “I was introduced by particular desire to Mrs Wyndham Lewis, a pretty little woman, a flirt and a rattle, indeed gifted with volubility I should think unequalled and of which I can convey no idea. She told me she liked silent, melancholy men. I answered that I had no doubt of it.”

Recognising the talent and apparent genius of the flamboyant and extraordinary young man Disraeli, Mary Ann uses her husband’s influence to help to secure for him a seat in parliament – the start of his colourful, controversial but brilliant career.

Upon the death of Wyndham Lewis, Disraeli proposes marriage to Mary Ann whose friends impress upon her their age difference and the fact that Disraeli is looking to prosper with her wealth and influence.  She eventually rejects his proposal but then is so lovelorn she finally and joyfully relents.   When they married in 1839 although it was largely for Disraeli’s financial convenience, to everyone’s surprise they fell in love and it was an extremely happy union.

Established as a name in politics, with his beloved Mary Ann as his ‘guiding angel’ Disraeli – known familiarly as Dizzy – strives against dramatic setbacks to attain his ultimate goal.  Disraeli reigns in triumph as Queen Victoria’s favourite and in the last poignant scene of the play as Dizzy is gently drifting away, his private secretary Monty Cory takes up the narrative as the great man dies. 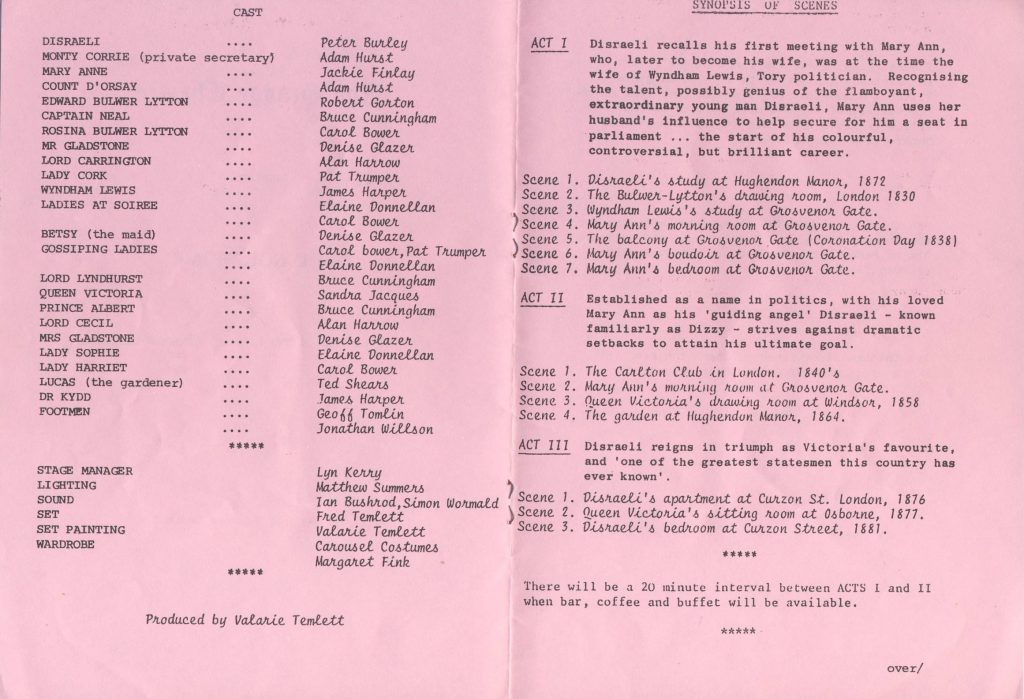 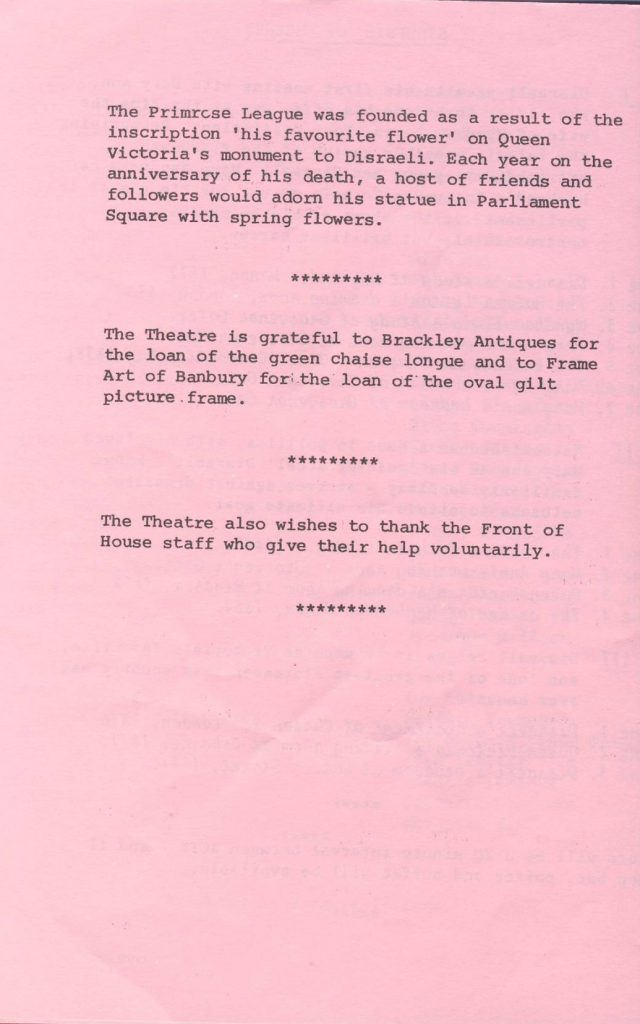 Clicking on the image will open the lightbox; top right “x” closes it.

This tour de force by Val turned out to be very testing for her as she needed to research in depth the relationship between “Dizzy” and his reigning monarch. At one point copies of letters between Queen Victoria and her prime minster needed reading and, as her majesty’s hand was rather, um, shaky it fell to a pharmacist, Barbara Bennett (long-suffering wife of the theatre’s electrician/dog’s body Keith) to decode them. After all, reasoned Val, if she could read doctors’ handwriting, well then . . .

The huge cast meant that Fred  had to draw up tortured and complicated rehearsal schedules for all the actors – no mean feat when they, quite naturally, had other calls on their time. Val displayed an extraordinary capacity for memory in weaving the individual segments of rehearsal into one cohesive whole.