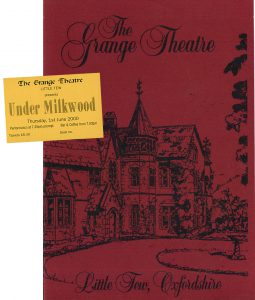 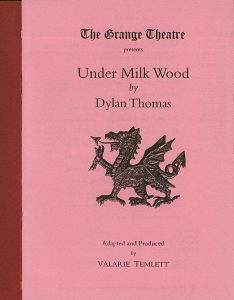 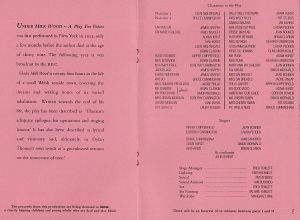 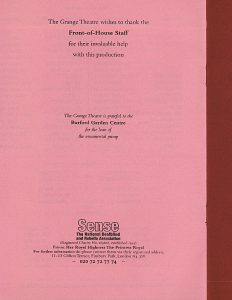 Under Milk Wood was a wonderful show – Dylan Thomas‘s masterful description of this little, imaginary Welsh fishing village “Llareggub” (“bugger all” backwards!) is deservedly regarded as a classic of British literature. Val’s adaptation on such a tiny stage was little short of miraculous but it certainly kept cast and crew on our feet.

In my mind, certainly, it’s earned a place if only for the longest lighting cue I’d ever run: on the photograph of the backcloth can be seen – halfway up the hill – a tiny cottage. Onto its windows Val wanted an extremely tight-focussed spot of light with no spill whatsoever.

Act 1 opens in almost complete (pre-dawn) darkness while the opening lines are spoken by the narrator. Dark, that is, except for this single intimation on the hill that someone was already up and doing. Slowly – almost real time – she directed that the daylight should gently build, first on the hilltop and then spread down into the village.

( This effect was doubly-difficult on such a shallow stage. In order for me to light the hill top first, without also illuminating the foreground, Fred erected that ‘stone’ arch between the buildings. The inevitable spill from  the back batten lights behind it, which flooded the backcloth, was thus contained while the arch – remaining relatively gloomy – helped give the impression of perspective and the advance of daylight from up-stage to the down-stage apron. )

As the minutes passed and the light levels built, the inhabitants were emerging into full daylight; the entire, slow build took about twelve minutes (felt longer!) and, perhaps surprisingly, was very difficult to do.

One’s eyes tend to adjust to altering light levels in tiny steps; the brain is suddenly aware that there’s more light and adjusts the pupils accordingly. Moments later the same sequence occurs and it may be quite distracting. (In real life we rarely watch, say, dawn so closely as we would in a theatre where time has to be more compressed.)

In consequence the ‘steps’ had to be spaced such that the audience’s perception of the event was that of a smooth build-up of daylight. I could obviously only time the increase through my own eyes and it needed concentration to avoid that impression of steps. Sounds easy, but . . .

. . . I’ve just received a photograph from Margaret, Peter Wroe‘s widow. Peter (or ‘Pedro’ as he was affectionately known) was the theatre’s sound engineer for many years before he sadly died back in the spring of 2018 and – in the nature of things – poor Margaret is only just now beginning to sort his belongings out.

The photo brought back bittersweet memories; he took it one evening just as this 2000 production of Under Milk Wood was about to commence Act I. How do I know?  Well, as I wrote (above) I quite obviously had to use my own responses to gauge when those lighting incremental steps were becoming noticeable and, to do that, I needed my night vision to be really well-tuned before the slow build commenced.

Just above the lighting control panel in Pedro’s photo can be seen a very dim yellow bulb (its reflection glows on the panel’s surface). Sound had a similar low-wattage bulb and the control room was thus very dimly lit. We’d turned off our usual 100 watt ‘working light’ well in advance so my eyes could accustom themselves to the gloom. 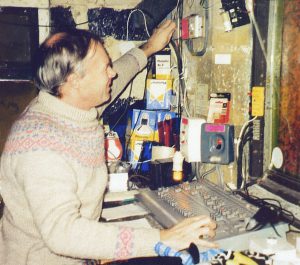 That vertical small yellow box in front of me held the three ‘alert’ bulbs connected to the stage manager’s desk just off upstage right: a red one for ‘stand by’, a green one for ‘go’ and a blue one which would flash if he required our attention (he and I wore headsets for quiet conversations). Above them you might discern a little red lever which, when pressed, lit a blue bulb on the SM’s desk informing him that we needed to speak to him on the headsets.

The audience was in, the red bulb went out, SM flashed his green (we always watched that blue one like hawks just in case of some unforseen disaster which needed urgent attention), the houselights almost dimmed out (my left hand’s up on its control knob) and I was gently fading out the ‘tab warmers’ (front-of-house stage lights which dress the closed main curtains) on the board’s bottom preset and we were chuckling over the fact that Pete now had quite a busy time with sound effects which needed close attention to his script. (How do I know the show was ths one? For most shows my script was propped behind the control board on that nest of black cabling but, for this one, I had no need of the script for quite a while – I needed no specific cues so long as I’d brought up full daylight at a certain page – so it was laid by my tummy until the light from the stage was strong enough for me to move/read it.)

So there we are – the opening moments of the show, the main curtains about to part – and Pedro decided to take a photograph of yours truly, with flash! In one startling heartbeat I was blindingly illuminated, my night vision destroyed and then plunged once again into stygian darkness! I was not a happy bunny and Pedro paid for his wickedness quite literally, by buying all my Guinnesses for the remainder of the show’s run. And we got through quite a number of beers – that control room quickly became very cozy with the heat of 24 electronic dimmers plus a large mixing desk, two amplifiers and three tape decks pushing out their warmth in an attempt at keeping cool.

Quite extraordinary, the memories that just one seemingly casual photo can bring to the surface.