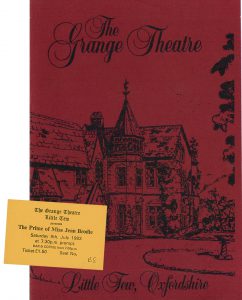 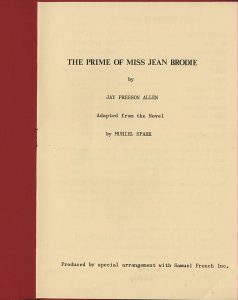 Production dates were from  the 21st of June for eight nights through to Saturday the 16th.

“Give me a girl at an impressionable age, and she is mine for life.” So speaks Jean Brodie, a liberated and charismatic schoolteacher.  The play is a gripping, entertaining, powerful drama of adolescence and adulthood, of betrayal and manipulation, and the powerful, lasting effect of a charismatic teacher.

At the start of the play a nun, Sister Helena, is being interviewed about the rather strange book she has written on psychology called The Transfiguration of the Commonplace. When the journalist enquires about the main influences of her school years she replies “There was a Miss Jean Brodie in her prime….”

The action then moves back in time to Edinburgh in the 1930s is conservative and respectable, but at the Marcia Blaine School for Girls, Miss Brodie stands out among the drab faculty, with her passionate teaching style.  Ignoring the more mundane subjects, she instructs her girls in Italian art, unconventional romance, and Fascist politics.  Miss Brodie concentrates her efforts on a small group of favoured girls, the “Brodie set.”  She almost feels that she can preordain her students’ futures, especially those of her set, and as such she has the loyalty of those girls.  In the 1932/33 school year, when thirty-something Miss Brodie considers herself in the prime of her life and as such has more of her experience to impart, she has among her set: Sandy, the insightful one whom she adopts as her special confidante repeatedly reminding Sandy that she has “insight but no instinct”; Jenny, the very pretty romantic; literary Monica; and the timid, stuttering orphan Mary McGregor, who accepts the guidance of anyone who will provide it to her.

Miss Brodie is at odds with most of the other staff, but especially the strict head mistress, Miss Mackay, not only because Miss Brodie does not teach the prescribed curriculum, but because of what Miss Mackay sees as Miss Brodie’s improper attitude on life which she brings into her classroom.  It is Miss Mackay’s mission is to fire Miss Brodie, despite Miss Brodie having tenure.

When Teddy Lloyd, a handsome art teacher, tries to reignite a past, passionate affair, Miss Brodie retreats into the arms of meek, conventional choir master Gordon Lowther. But when she tries to have a love affair on her own terms, the subsequent sneaking around endangers her job, leaving her vulnerable to enemies. Will Miss Brodie’s dedication to the teaching profession, and to the hearts and minds of her girls, keep her in her prime?  Will her influence be benevolent, or is she just “not good for people.”

It is not until the end of the play we discover that Sister Helena is in fact, Sandy, Jean Brodie’s pupil who “betrayed” the teacher by suggesting to Miss Mackay that she could accuse Brodie of encouraging fascism.  That tactic succeeds and Jean Brodie is dismissed from the school. 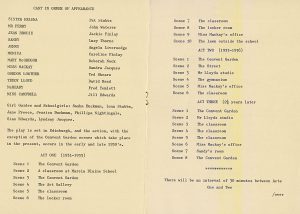 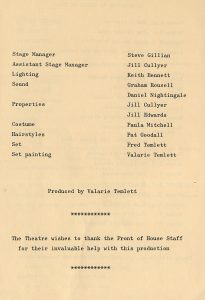 This was one BIG show – no less than 24 scenes spread across three Acts; the crew used to ruefully note that in the programme, Act 3 is set “2½ years later” – and some nights it felt like the show really was that long!

And of course after the final curtain the stage had to be reset to Act 1 ready for the following performance (and hearing sounds of merriment and clinking glasses from the bar really didn’t help . . .)