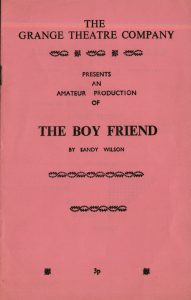 For the second show it was decided to put on this popular little musical with proceeds going to the planned Banbury Art Centre Project. The town had long needed a permanent theatrical base for the use of amateur (and, later, it was hoped) professional companies. The two principal amateur societies were the Banbury Cross Players and the Banbury Amateur Operatic Society, who perforce had to use school halls and/or a small stage area in the Church House in Horsefair.

The cast of The Boyfriend was an amalgam of talent from around the area brought together under the generic but temporary title of The Grange Theatre Company.

The whole musical is set in the Villa Caprice where Maisie, the girls (Dulcie, Nancy, Fay), Hortense (the maid), and Mme Dubonnet live at Mme Dubonnet’s School for Young Ladies. Act I begins when Hortense orders a costume for “a Miss Polly Browne” and Maisie and the other girls (Dulcie, Nancy, and Fay) sing the ironic “Perfect Young Ladies” with Hortense. Polly arrives and tells everyone about her made-up boy friend who is “motoring down from Paris” to meet her for the upcoming carnival ball, and sings about “The Boy Friend”. Later, Bobby surprises Maisie, and they dance to “Won’t You Charleston With Me?”

Polly’s widowed father, Percy, then arrives at the school to discover that the headmistress, Mme Dubonnet, is an old flame of his. They sing “Fancy Forgetting” to rekindle the spark. Polly, though a millionaire’s daughter, feels left out because she is the only one of her friends who does not have a boyfriend and she needs a partner for the fancy dress ball. The errand boy, Tony, arrives to deliver her Pierrette costume and they are immediately attracted to each other, and sing “I Could Be Happy With You.”

The curtain opens with the chorus number “Sur la Plage”. After this dance number, Polly and Tony meet at the beach and Polly lies about being rich to fit in with Tony. They sing about their future lives together in “A Room in Bloomsbury.” They are at the verge of kissing when Hortense interrupts them and is shocked to find Polly with a poor messenger boy. Polly begs Hortense to keep her secret and Hortense agrees. After Tony and Polly leave, Hortense sings how everything is “Nicer in Nice” with the ensemble. After that, The “aging roué” character Lord Brockhurst arrives on the scene, leading to a comical meeting with the rigidly-mannered Percival Browne. Lord Brockhurst’s domineering wife Lady Brockhurst is also introduced. Percival Browne and Mme Dubonnet then sing “The ‘You-Don’t-Want-To-Play-With-Me’ Blues”.

When Polly goes to meet Tony on the promenade, Lord and Lady Brockhurst, who are passing by, recognize him. When he runs off, everyone else assumes that he is a thief. The act ends with a reprise of “I Could be Happy with You” sung by Polly and the other characters on a sad note.

At the ball, Bobby and the three boys propose to Maisie and the three girls, but the girls reply in unison that “we’ll let you know at midnight” and everyone dances to “The Riviera”. After everyone has left, Tony and Hortense run into each other. Hortense scolds Tony and tells him to meet Polly at the ball because she loves him as much as he loves her. Tony leaves to prepare for the ball as Lord Brockhurst sings “It’s Never Too Late To Fall In Love” with the flirty Dulcie, and is caught by Lady Brockhurst. At the Carnival ball, Polly is sad that Tony is not there and she is thinking about leaving. Hortense tells Mme Dubonnet to persuade Polly to stay, so Polly sings “Poor Little Pierrette” with Mme Dubonnet. Tony later arrives at the ball and takes Polly by surprise. He asks “May I have this dance, Pierrette?” to which Polly replies, “I’m afraid I can’t dance with a stranger”. He then kisses her to remind her that it is he. When Tony removes his mask, Lord and Lady Brockhurst run to him, exclaiming they found their son at last. Polly and the others discover that Tony is really the son of the rich Lord and Lady Brockhurst, and he had left home to try to make his own way in the world. Polly tells Tony that she is actually rich as well, and Percy and Mme Dubonnet announce that they are getting married. The clock strikes midnight, and the girls unanimously say yes to the boys’ proposals. The last scene has everyone dancing as soon as Bobby, with the last spoken line in the play, asks “So how about that dance?” The show ends with a reprise of “The Boy Friend”, “I Could Be Happy With You”, and “A Room In Bloomsbury”. 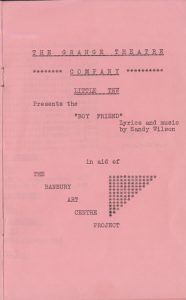 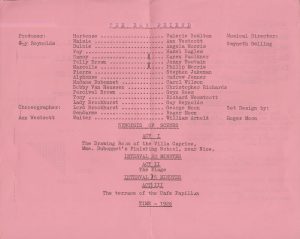 In the photo gallery (above), the shot of Maisie and Bobby Van Heussen dancing also captures a glimpse of our original main curtains. These were deep red with that white fringe at the bottom – they were also second-hand and spectacularly threadbare; so much so that if the front-of-house lights were turned off, anyone on stage was clearly visible as if behind a gauze (which indeed it resembled!)

Happily, salvation was at hand thanks to the good offices of Andrew‘s father, Roger Jenner (our stage manager for many years), who mysteriously “found” the most beautiful and heavyweight set of golden curtains. We had to strenghten the tracks to cope with the extra load . . .