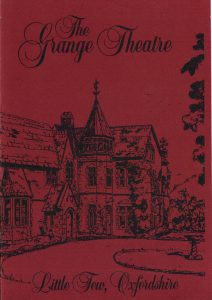 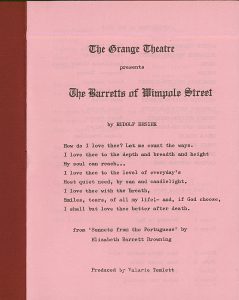 The bulk of the story takes place in the lavish home of Edward Barrett and his adult children. Upstairs the oldest girl, Elizabeth (called “Ba”), consults with her doctor. She is recovering from an undisclosed illness and is extremely weak – standing and walking are painful – but the doctor advises that a full recovery is possible.

She has a vivacious and brilliant mind; her poetry is frequently published, she has a cute Cocker spaniel called “Flush”, and she loves fooling around with her siblings, especially her youngest sister, Henrietta . Her father Edward, however, is displeased by the light-hearted atmosphere in Elizabeth’s room. He wastes no opportunity to remind her that she is very ill and possibly in danger of death. He seems perversely determined to keep her confined, as though he does not want to allow her to make a full recovery; he even goes so far as to defy the doctor’s orders. When she complains that the stout which she has been advised by the doctor to take is making her feel worse, the doctor takes her off it and puts her on hot milk instead, but Edward forces her to continue drinking it.

Meanwhile, Henrietta is interested in marrying her brothers’ friend Surtees, who has a promising career in the military. But she discourages him; she cannot see any way around her insanely possessive father, who has forbidden any of his children – including his six boys – to marry.

Robert Browning arrives in a snowstorm, and immediately sweeps Ba off her feet. Her poetry has caused him to fall madly in love with her. When she expresses her fear that death may be at hand, he laughs it off and encourages her to seize the day. When he leaves her room, she rises from her settee for the first time and drags herself to the window so she can see him as he departs.

Months pass – Ba is able to walk slowly and to go downstairs to see Robert. Her father warns her not to overdo it and tells her it’s just a temporary recovery. The doctors prescribe a trip to Italy for the winter. Edward is considering it, when chatty Cousin Bella accidentally discloses that Ba’s relationship with Robert isn’t just a meeting of minds. Edward immediately vetoes the trip and leaves the house, saying he’s got another idea that may help her get the fresh air and sunshine she needs without having to leave the country. While he’s out, Robert and Ba meet in Kensington Gardens. He assures her that he will take her to Italy and that she should be ready by the end of the month. She says she’ll think about it.

Edward’s plan turns out to be a scheme to get Ba out of London, away from friends and activity (all for the good of her health, of course). He writes, bidding her tell her siblings that he’s about to sell the house and move them all out to Surrey, six miles from the nearest railway station. Ba relays the message but doesn’t tell Henrietta, who is now firmly committed to Surtees.

Unexpectedly, Edward returns early, catching Henrietta and Surtees modelling his dress uniform for Ba in her room. Brutally grasping her wrists, he forces Henrietta to confess her secret affair. Denouncing her as a whore, he makes her swear on the Bible never to see Surtees again and to lock herself in her room. Ba witnesses all of this. When Edward starts to blame her for aiding and abetting Henrietta’s illicit relationship, she reveals her true feelings. Smashing the façade that has allowed her father to keep a dictatorial control over every minute of her waking life – she says that, far from obeying him out of love, she hates him, and denounces him as a tyrant. Unrepentant, her father walks out of the room, saying she can send for him when she has repented of her sins.

Ba conspires with her maid Wilson to let Robert know she will elope with him and Wilson will accompany them. Henrietta, when set free, runs to Ba and exclaims that she will break her Bible oath – lie to her father if necessary – and run away with Surtees if she must.

Edward enters and dismisses Henrietta to speak to Ba alone. He opens up to her and confesses his real feelings and the motivation for his “dragon” behaviour. Edward apparently thinks of himself as having a sex addiction, and he tyrannized his wife as well, and that some of the children may actually have been conceived through marital rape. Edward now suppresses all his desires, equating all sex with sin, and he wants his children never to fall prey to carnal passion. As he goes into detail about how he wants Ba all to himself, to have her confide in him all her thoughts and feelings, he embraces her and actually comes close to making a sexual pass. Horrified by his inhuman behavior, Ba repulses him, and cries out that he must leave her. He apologizes and leaves, saying he’ll pray for her.

Ba summons Wilson, puts on her cloak and hat, takes her little dog “Flush” and departs. As the two sneak down the stairs, we hear Edward saying grace over dinner. A few moments later, we hear the hysterical laughter of Ba’s sister Arabel. The boys rush upstairs, followed by Henrietta, to find that Ba has left one letter for each of the siblings and Edward. Edward reads his letter and staggers to the window. As if drunk, he insanely mutters “I’ll have her dog”, and bids his son Octavius take Flush to the vet and have her killed. Octavius cries out that it is unjust, and Henrietta triumphantly drives the final blow; “In her letter to me Ba writes that she has taken Flush with her . . .” 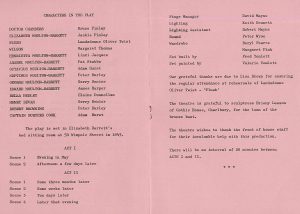 Clicking on any image will open the lightbox, with a set of controls on the lower edge. Hovering the mouse over the controls will show a brief description: