The leading lights of their village have decided to hold a pageant of local history based on a somewhat vague event, “The Massacre of the Pendon Twelve.” But there’s a young left-wing teacher on the committee who decides to turn it into a rally for proletarian revolution. Committee meetings become symbolic battlefields for conflicting views – the right wing faction being led by the Chairman’s conservative wife. The event turns into a violent confrontation between the two extremes, with cataclysmic results. Police intervention brings matters to a relatively quiet conclusion, but already another pageant – Romans versus Britons – seems an attractive possibility. 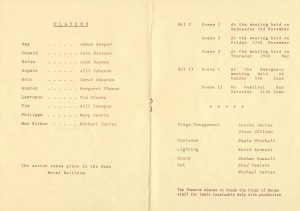