Both Fred and Val were outraged at press reports and pictures concerning the palpably ill-treatment of farm animals for export. As vegetarians (this, don’t forget, at a time when the practice was still very much in the minority) they determined to try and raise some funds to support the Vegetarian Society of Great Britain (if memory serves) and – as the both of them were Welsh – what better than an evening of song rooted in the history of that Principality?

To both their surprises, both evenings were a sell out. Just goes to show . . . 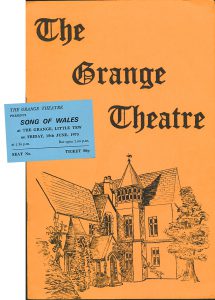 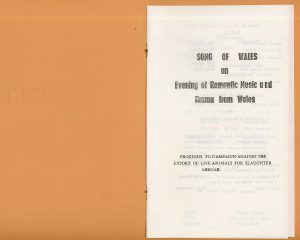 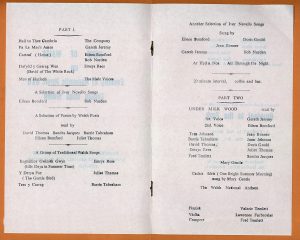 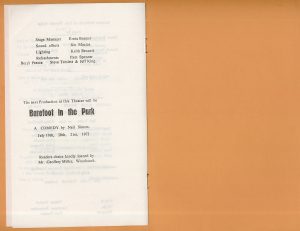 Of the cast, only three are currently recognisable on the two photographs – because only two pictures survive, the remainder of the cast must remain unsung (given the show’s title, please excuse the pun).

Just two, I’m afraid, and both printed on what was at the time a fashionable textured finish, which does nothing for close scanning work. 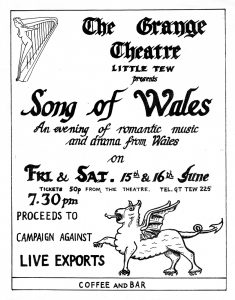 Difficult to remember, so many years on, that we were still uncertain of whether tickets would sell nor how to contact prospective patrons (Fred’s idea for a mailing list/letter was still in the future) and so we relied pretty much on word of mouth and good old-fashioned postering around the area. Unlike many ‘posterers’ (is that even a word??) we conscientiously went round and took them down immediately after the performances.

Given the reason for the production, one member of the crew commented sotto voce that he wished any livestock loader the best of luck it they tried abusing that dragon!