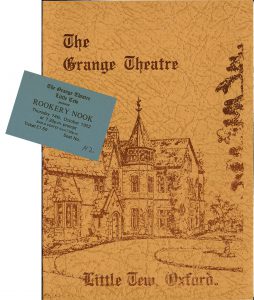 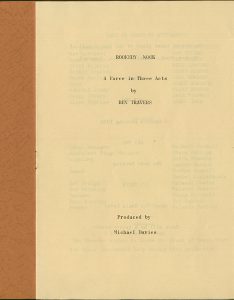 
The action takes place on a summer night in the lounge-hall of “Rookery Nook”, a house at Chumpton-on-Sea, Somerset.

The formidable Gertrude Twine has arranged for her newly-wed sister, Clara Popkiss, and husband Gerald Popkiss, to stay at Rookery Nook after their honeymoon. Gertrude and her henpecked husband Harold live nearby. Clive Popkiss, Gerald’s cousin, is staying with the Twines, and when Gerald arrives Clive is at Rookery Nook to greet him.

Except for a larger-than-life daily charwoman, Mrs Leverett, Gerald is temporarily on his own at Rookery Nook, Clara having gone to visit her mother. After Clive leaves, Gerald’s solitude is interrupted by the incursion of a young woman, barefoot, wet, and wearing only pyjamas. She is Rhoda Marley, who lives nearby with her ferocious Prussian stepfather, Putz. He has thrown her out of his house for some trivial offence. Gerald lends her a pair of dry pyjamas and a dressing gown. She has nowhere else to go, and the gallant Gerald agrees to give her refuge at Rookery Nook.

Putz comes to the house with his dog, looking for Rhoda, but, thwarted, he departs in a loud rage. Gerald cedes the main bedroom to Rhoda. He is extremely uneasy and fears that, despite the purity of his intentions, there will be a scandal. The worldly Clive discovers the situation and gives Gerald moral support. Gertrude and Harold Twine enter, and Rhoda hides in the kitchen. Harold finds her there and is hastily sworn to secrecy by Clive and Gerald, though he is terrified that Gertrude will discover that he has deceived her. Clive assures him that he will explain everything in the morning.

The following day, Harold turns up to hear Clive’s explanation. Unknown to the men, Mrs Leverett and Gertrude Twine also arrive; they see Rhoda coming out of Gerald’s bedroom and are in haste to tell Clara about it. Clive and Gerald bully Harold into going to fetch some clothes for Rhoda so that she can leave the house and escape to London to stay with friends. While Harold is away on this errand, a further intruder, Admiral Juddy, arrives at Rookery Nook demanding to know why Harold has failed to turn up as agreed for a round of golf.

Clive, who has taken strongly to Rhoda, offers to drive her to London. Harold returns, having failed to secure any of Rhoda’s own clothes from Putz’s house: Putz set the dog on him, and he fled. Instead, Harold has brought some of his wife’s clothes, but Putz, wise to the scheme to rescue Rhoda, takes them from him.

Admiral Juddy has heard from Harold that Rhoda is hiding at Rookery Nook. He calls to offer her refuge at his house, but the lack of respectable daytime clothes for her to appear in remains an unsolved problem. Poppy Dickey, a lively young woman from the village, calls, collecting for charity. Rhoda persuades her to lend her the clothes she is wearing, and thus clad Rhoda escapes. Alerted by her meddling sister Gertrude, Clara arrives. She confronts Gerald, whose answer is to throw open the bedroom door, trusting that Clara will see that Rhoda is an innocent damsel in distress. Instead Clara finds Poppy, in her underwear. Gerald attempts to explain about the lunatic Putz and his conduct to Rhoda, but this line falls flat when Putz himself appears, and, to thwart Gerald and Clive’s plans, behaves with exaggerated restraint and courtesy.

Gerald is floundering until Rhoda shows up to thank him for his help, along with Clive, who accuses Mrs Leverett of spreading malicious rumour about Rhoda. Mrs Leverett protests that it was Gertrude who started the rumour that Rhoda was not Putz’s stepdaughter but his mistress. Putz, hearing their scandalous accusation, flies into a towering rage, substantiating Gerald’s explanation. Gerald and Clara are reconciled and Clive happily pairs off with Rhoda. 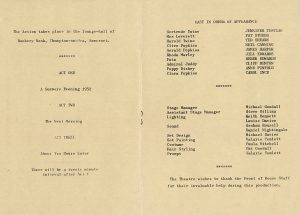