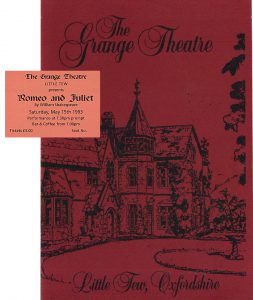 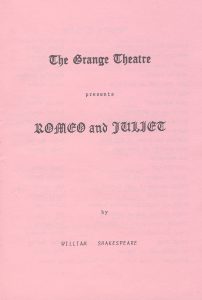 An ongoing feud between the Capulets and the Montagues breaks out again on the streets of Verona. Both sides are warned by Prince Escalus that they must not disturb the peace again, on pain of death.
Romeo, love-sick for Rosaline, is comforted by his friend Benvolio. Capulet tells Paris that he may not marry his daughter Juliet until she is older. Romeo and his friends learn of a party being held by the Capulets, and decide to go to it as masquers. At the party, Tybalt sees Romeo, but is prevented from fighting him by Capulet. Romeo meets Juliet, and they instantly fall in love. After leaving the party, Romeo eludes his friends, returns to meet Juliet, and they exchange vows of love. Romeo tells Friar Laurence what has happened and he consents to marry them.

Benvolio tells Mercutio that Tybalt has sent Romeo a challenge. Romeo joins them, and is visited by the Nurse, who is told the marriage plan. She tells Juliet, who then goes to Friar Laurence’s cell, and the lovers are married. Tybalt, looking for Romeo, finds Benvolio and Mercutio. Romeo returns, and is challenged by Tybalt, but refuses to fight. Mercutio draws on Tybalt and is fatally wounded. Tybalt then fights with Romeo, and is killed. Romeo flees, and Benvolio reports what has happened to the Prince, who banishes Romeo. The Nurse tells Juliet of Romeo’s banishment and promises to bring him to her. The Friar tells a distraught Romeo he is banished, but advises him to visit Juliet secretly, then to leave for Mantua.

Capulet tells Paris he may marry Juliet in three days, and Lady Capulet brings the news to Juliet, who has just bid Romeo a hasty farewell. Juliet refuses to marry Paris, persisting in the face of her father’s anger. She goes to the Friar for help, and finds Paris there arranging the marriage. After he leaves, the Friar devises a plan: he will give her a drink that will make her appear dead and thus avoid the marriage, and will write to Romeo to tell him; they can then elope to Mantua.

Juliet tells her father she will now marry Paris, and Capulet brings the wedding forward to the next day. Juliet retires, and drinks the liquid. When her ‘body’ is discovered, all mourn, and she is taken to the family crypt. In Mantua, Balthasar tells Romeo that Juliet is dead. He vows to lie dead next to her that night, and obtains a poison from an apothecary. Friar John tells Friar Laurence that he was unable to deliver Laurence’s letter to Romeo. Realizing the danger, Laurence leaves to tell Juliet what has happened.

Paris goes to Juliet’s tomb to mourn her, and encounters Romeo. They fight, and Romeo kills Paris. Romeo then drinks the poison and dies by Juliet. The Friar arrives to see Romeo dead and Juliet waking. She refuses to leave, and kills herself with Romeo’s dagger. Officers arrive, and rouse the families and the Prince. The Friar explains what has happened. Montague and Capulet agree to make peace with each other. 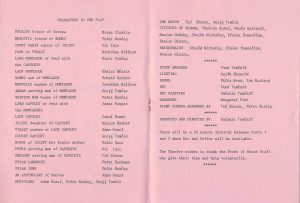 Another Shakespearian production and while the cast worked overtime to learn their lines the techies in the control room had to follow the show pretty well line-by-line during the performance for fear of losing their place, as they weren’t exactly up to speed with things Shakespearean. Of course, once a sound or lighting cue is missed – well, you can imagine – panic promptly sets in as we frantically tried matching the real-time words arriving via the sound relay with the written words in our scripts, knowing all the while that some important cue might be bearing down on us. We could hardly halt the action just ‘cos we’d lost our place, rather as an air traffic controller can’t really ask an approaching aircraft to stop a minute while he finds his place . . .

Amusingly, some months before the show, Fred had been asked by a local journalist what the next show might be. “Well, dear boy, Valarie and I are rather in a cleft stick regarding the choice. We’ve trawled through many synopses but most modern plays are so full of sex and violence which we don’t think suitable for our audiences, so eventually we’ve settled on Romeo and Juliet.”

And he delivered that startling observation without, seemingly, knowing just what lust and carnage that clever Mister Shakespeare had incorporated into that plot!