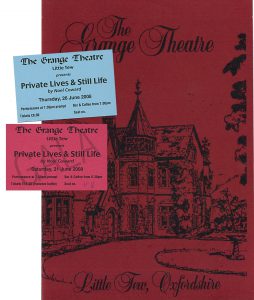 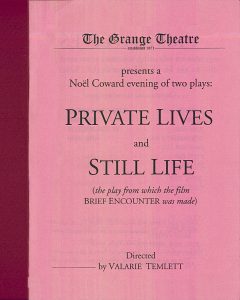 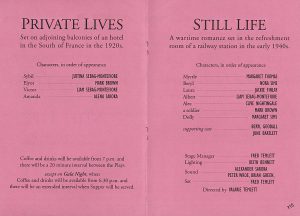 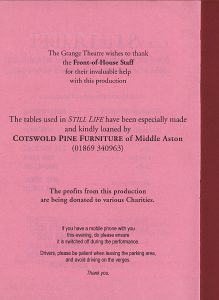 That final photograph in the Still Life series was taken by me (Keith) from my end of the control room during a quiet moment for Elena (Amanda in Private Lives) when she was able to tip-toe in and watch from a good vantage point over the shoulder of her husband Alexander.

He was running sound for the two productions, the first time he’d ever been in that position, and was making a good job of it. By far the most difficult, cue-wise, was Still Life which is set in a railway station waiting room and of course several train sound effects were called for; some stopping trains, some expresses passing through. At one point in the action two passengers enter from the train heard out of view which had just puffed to a stop at the platform. Unfortunately on one evening poor Alexander chose the wrong cue – an express thundered through, followed just afterwards by the passengers (nameless, played by Beryl Goodall and her sister June Bartlett) who, with quick thinking, rendered themseves rather dishevelled as though having just thrown themselves from it! A delighted roar of laughter from the audience rewarded them.

I was surprised the photo came out at all: the control room is darkly lit by just two low-wattage lamps but Elena and Alexander were so engrossed in the action that they were hardly moving. That little room would get quite warm, heated as it was by the electronic dimmers etc and so, of necessity, sufficient draughts of Guinness and Hooky Ale simply had to be inbibed to ward off dehydration…

Also of note was our attempt at providing an elegant supper on the Gala evening of Saturday 21st June. As has been written elsewhere in this site, summertime audiences could be the bane of Fred’s life as they took their interval drinks and vanished, exploring, into five acres of garden. This evening was no exception and, allied to the necessarily lengthy serving time, meant that the performance didn’t end until very late in the evening. “Never again, old boy,” he said!