Currently no documents for this production other than two press cuttings.


Following a brief courtship, Elyot and Sybil are honeymooning at a French hotel at Deauville, although her curiosity about his first marriage is not helping his romantic mood. In the adjoining suite, Amanda and Victor are starting their new life together, although he cannot stop thinking of the cruelty Amanda’s ex-husband displayed towards her. Elyot and Amanda, following a volatile three-year-long marriage, have been divorced for the past five years, but they now discover that they are sharing a terrace whilst on their honeymoons with their new and younger spouses. Elyot and Amanda separately beg their new spouses to leave the hotel with them immediately, but both new spouses refuse to co-operate and each storms off to dine alone. Realising they still love each other and regretting having divorced, Elyot and Amanda abandon their spouses and run off together to Amanda’s flat in Paris.

After dinner at the Paris flat several days later, Elyot and Amanda use their code word “Sollocks” to stop their arguments from getting out of hand. They kiss passionately, but the harmony cannot last: while Elyot and Amanda cannot live without each other, neither can they live with each other. They argue violently and try to outwit each other, just as they had done during their stormy marriage. Their ongoing argument escalates to a point of fury, as Amanda breaks a record over Elyot’s head, and he retaliates by slapping her face. They seem to be trapped in a repeating cycle of love and hate as their private passions and jealousies consume them. At the height of their biggest fight, Sybil and Victor walk in.

The next morning, Amanda tries to sneak away early, but is surprised to find Sybil and Victor there. As they talk, Elyot comes in, and he and Amanda start bickering again. It has been decided that neither of the new spouses will grant a divorce for a year, to give Amanda and Elyot time to confirm if this is really what they want. As tempers rise, Sybil and Victor begin to bicker with each other, defending their respective spouses. Amanda and Elyot realise that Sybil and Victor are as suited to each other as they are, forgive one another and sneak out, leaving the younger two together. As Elyot and Amanda depart, Victor and Sybil have once again reached the point of mutual violence. 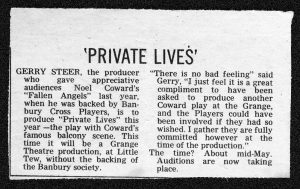 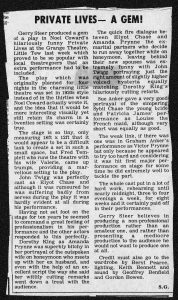 Once again, the audiences were given a taste of what was to come . . . 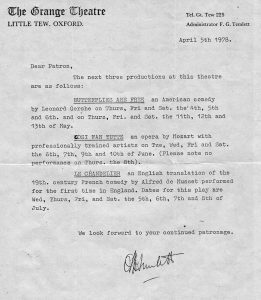