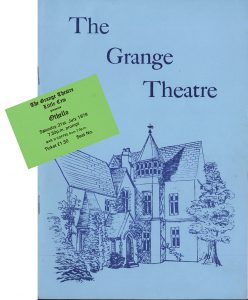 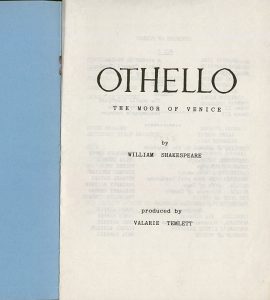 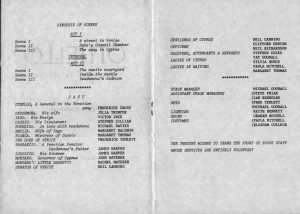 Othello, a Moorish general of Venice, has promoted Cassio as his lieutenant; Iago, who was hoping for the promotion himself, makes plots against both Cassio and Othello to exact revenge. Othello has secretly married Desdemona, the beautiful daughter of Venetian senator Brabantio, and Iago determines to use Desdemona as the means of his revenge. When Othello is posted to Cyprus by the Duke of Venice, Iago escorts Desdemona there to meet him, taking along his own wife, Emilia. When they’ve arrived in Cyprus, Iago sets his machinations to motion. He tricks Cassio into getting drunk, then has Roderigo—a former suitor of Desdemona whom Iago has convinced to aid him with the hope of winning Desdemona back—pick a fight with Cassio that ends in Cassio’s arrest. Because of this, Cassio is demoted. Then Iago has Cassio visit Desdemona, saying that an appeal to her might do well to convince Othello to reinstate him.

This accomplished, Iago goes straightaway to Othello so that he can lead him to where Desdemona and Cassio are talking. As Iago and Othello view the scene, Iago plants seeds of doubt and jealousy in Othello’s mind concerning Desdemona’s fidelity. The scenario Iago suggests is that Cassio and Desdemona are having an affair. Later, fortune literally drops Desdemona’s handkerchief into Iago’s hand; he gets the handkerchief from Emilia, who discovered it, plants the handkerchief in Cassio’s room, and then tells Othello that he saw Cassio with it. When Othello asks Desdemona about the handkerchief, she tells him that it was lost (which is the truth as she knows it). Cassio, meanwhile, has given the handkerchief to a courtesan with whom he is intimate. Iago manipulates a conversation with Cassio about his courtesan to make it appear to Othello—who is eavesdropping at the behest of Iago—that Cassio is talking about Desdemona.

His smoldering rage now beginning to bubble over, Othello tells Iago to kill Cassio and then angrily confronts Desdemona. In spite of Desdemona’s protests of innocence (backed up by Iago’s wife, Emilia), Othello is now convinced of her infidelity with Cassio. Iago, meanwhile, has Roderigo attempt to murder Cassio; when Roderigo fails to do more than wound the soldier, Iago slays him so that Roderigo can’t implicate him in the affair. Othello strangles Desdemona in her bed. When Emilia discovers the crime, she decries the Moor as a villain and at first refuses to believe that Iago has so evilly manipulated Othello. However, Iago’s appearance and subsequent answers lead Emilia to confront the fact that her husband is responsible for this tragedy. When Iago cannot keep Emilia from telling the truth about the handkerchief, he stabs her and attempts to escape; not only is he captured, but letters found on Roderigo’s body thoroughly implicate Iago as the treacherous villain that he is. Faced with the shame of having murdered an innocent Desdemona, Othello stabs himself in front of Cassio and dies on Desdemona’s bed, beside her. 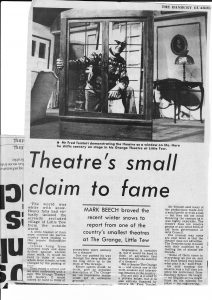 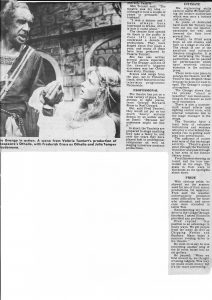 For this lighting bloke with little Shakespearian knowledge, the production proved most testing. Usually one fairly quickly got the hang of a show and pretty much knew where in the script the current action was taking place. Not with Othello: unless the script was followed slavishly it was too easy to lose the place, mild panic on my part thus ensuing.

At this late remove I can also express sympathy with members of the cast who struggled earnestly with learning their words but, eventually, it became clear that we needed one more week’s rehearsing to really nail it. 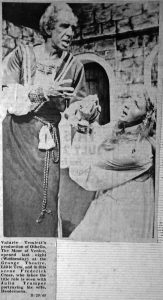 This mailing letter was on show to patrons of Othello as a tempter for future productions; it was posted out shortly afterwards.