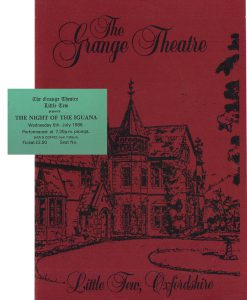 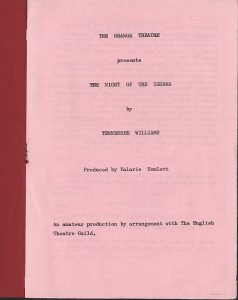 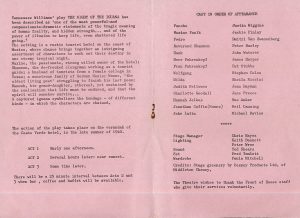 Act One The scene opens in Puerto Barrio, located on the west coast of Mexico. The play takes place on a verandah at Costa Verde, a rustic, Bohemian hotel located in the middle of a sprawling jungle. In the opening scene, the reader is introduced to Maxine Faulk, the proprietoress of the Costa Verde. Faulk is initially described as a “stout, swanky woman in her middle forties,” who recently lost her husband, Fred, due to an infection he developed whilst fishing. Although her husband only just passed away, Faulk still enjoys casual sex with Pedro, one of her Hispanic employees; she also wears revealing clothing around the hotel, and she is consistently flagrant with her sexual intentions.

Upon walking outside at the beginning of the play, Faulk stumbles upon Revd Larry Shannon, a young man around the age of thirty-five, who constantly appears nervous and disheveled. Currently, he’s conducting tours for Blake Tours, which travels through Mexico and Texas. Unfortunately, though, Shannon is a poor tour guide, as he strays away from the sites in the brochure and has sex with young ladies—especially girls under the age of eighteen. Faulk immediately begins flirting with him  and she tries to convince him to stay at the Costa Verde with her; she even tells him to ditch his tour and wear her husband’s old clothes and sleep in his bed. Even though Shannon desires to get back into priesthood, he is apprehensive about staying at the hotel and leaving his tour, which is composed of female teachers at Baptist Female College in Blowing Rock, Texas.

As Faulk talks to Shannon and his guide Hank, Miss Judith Fellowes who is one of the tour members, approaches the group and begins berating Shannon. An irate Fellowes yells at Shannon for not following the destination listed on the tour guide, which dictates that the group would stop at the Ambos Mundos in Puerto Barrio; furthermore, Fellowes also accuses Shannon of statutory rape of a young seventeen-year-old girl on his tour. After a round of discussion, Shannon convinces Fellowes that the tour should stay at the Costa Verde—much to Fellowes’ dismay.

Once Fellowes departs, a middle-aged woman, Hannah Jelkes and her grandfather, Nonno, approach Faulk and Shannon. The girl, who is described as “totally feminine,” ask Faulk if they can stay at the hotel—even though they are a little short on money. Faulk, who seems concerned with the fact that Hannah makes money by painting portraits and her grandfather is a famous poet that is seemingly losing his memory, initially denies their request as she fears that they will lack the money to pay. However, Shannon argues that he will cover their cost if anything happens, as he is attracted to Hannah. With much reluctance, Faulk opts to allow Hannah and Nonno to reside at the hotel briefly.

Act Two begins several hours later near sunset. At the beginning of the act, Faulk approaches Hannah, who is wearing an artist’s smock and setting up a card table. As Faulk talks to Hannah, she starts to question Hannah’s methods for making money. During the conversation, Hannah admits that she is completely broke, but she hopes to make money when she is staying at the hotel. After hearing Hannah’s response, Faulk comments that her husband’s death has left her (and the hotel) in a financial hole, so it is imperative that she makes money when tourists stay there.

Near the end of their conversation, Shannon appears on set wearing a wet bathrobe. Faulk, Shannon, and Hannah share a brief bit of conversation before Faulk goes to talk and drink with the Fahrenkopfs, a group of Germans that tout Nazi beliefs frequently. Once Shannon and Faulk are alone, they briefly talk before they are interrupted by a young girl named Charlotte who is the young seventeen-year-old girl that Shannon slept with earlier in the play. Upon hearing Charlotte’s voice, Shannon tries to hide in Hannah’s cubicle. Talking through the closed door, Charlotte tries to coax Shannon out of the door by talking about the events of their night together. Charlotte states that she wants to marry Shannon—even though he hit her after they had sex. Miss Fellowes discovers Charlotte talking to Shannon, and she drags her away to the back of the hotel, which causes Shannon to come out of the cubicle.

When Shannon leaves the room, he starts a conversation with Hannah. Their conversation casually leads to religion, and Shannon admits that he has been inactive every year in the Church except for one year. Later, Shannon states that he was “locked” out of the Church because of fornication with a young Sunday-school teacher, and heresy. As he addressed his congregation, Shannon called God a “senile delinquent”, who acts like a bad-tempered old man.

Faulk returns from her adventure with the Germans, and she goes to talk to Shannon and Hannah. The group hears a crash, and they rush into Nonno’s cubicle to find him on the group after he has fallen. Nonno states that he is fine as he is ninety-seven-years young, but he struggles to remember lines from his own poetry, which worries Hannah; nonetheless, Shannon takes pity on Nonno, and he gives him five pesos for his broken repetition of his poem.

Hannah notes that Nonno has had more “cerebral accidents” recently, and she is seriously beginning to worry about his mental health. After Nonno and Shannon banter briefly about God and his poetry, Faulk appears and taunts Nonno, calling him grandpa. Shannon, who has taken a liking to the old man, defends Nonno, and he starts arguing with Faulk. Eventually, the two get into a childish fight where the two repeatedly shove a liquor trolley into the other’s stomach–until it goes tumbling down the hill near the hotel. Once Shannon leaves to fetch it, Faulk tells Hannah that she needs to lay off Shannon. According to Faulk. Hannah is “not for Shannon” and “Shannon isn’t for her”; however, Faulk states that if Hannah stays away from Shannon, they can stay for as long as they want at the Costa Verde. Before Hannah can respond, Shannon returns to the table, and Hannah asks him to take Nonno inside while she grabs her art supplies to protect them from an upcoming storm. The act ends with Shannon looking out into the storm that has now hit the Costa Verde.

Act Three opens several hours later on the moonlit verandah. Shannon is writing a letter to the Dean of the Divinity School at Sewanee while Hannah and Nonno read and recite poetry in their respective cubicles. Faulk approaches Shannon, and she tells him that she is considering selling out and moving to the United States to rent out condos to fancy businessmen. She then proceeds to tell Shannon that she has heard from Fred how Shannon’s mother beat Shannon after catching him masturbating and made him repent; she then states that she believes that it has a connection to Shannon’s eventual distrust of God.

Halfway through his conversation with Faulk, she informs him that his tour is getting back into the bus and leaving the Costa Verde. Jake Latta, a representative for Blake Tours, has come to take over Shannon’s tour as the tour company has deemed him ineffectual at finishing it. Shannon argues with Latta for a brief time  and he is informed that the tour is reimbursing the ladies for half the price of their tour; this fact means that Shannon will receive no severance pay, and he will be stuck at the Costa Verde—unless he returns to Mexico City with Latta and the tour immediately. Miss Fellowes eventually joins the discussion, and she informs the group that she spend a large portion of her money performing a background check on Shannon that led to discover his past as a pastor. After a brief argument, Latta wrestles the bus key away from Shannon, and he departs with Hank and Miss Fellowes with intentions of leaving Shannon at the hotel.

Once Latta takes his key, Shannon begins to have a mental breakdown, and he threatens to swim all the way to China. As he attempts to escape, Faulk orders that her employees tie Shannon to the hammock while she calls for a doctor to give him a knockout injection; furthermore, Faulk states that if Shannon does not calm down, she will send him to Casa de Locos, indicating that Shannon frequently has mental breakdowns. While he is tied up, Hannah begins talking to Shannon in an attempt to calm him. She even makes him a batch of poppyseed tea, a mild sedative drink that she believes will help relax him. Hannah slightly criticizes Shannon for his life choices, but he responds by berating her for being a New England spinster.

Shannon eventually convinces Hannah to untie him, and he immediately goes to the liquor trolley to make himself a drink. Hannah begins to give Shannon advice on how to conquer his emotional struggles by comparing his life to her own. Hannah notes that she had a “blue devil” that she had to overcome by simply enduring and respecting the dark side of her nature. Shannon informs Hannah that he is shocked by the fact that she struggled emotional turmoil, but he nonetheless continues to prod her on the subject. She replies by stating that she proceeds towards the light in her life, and she calms herself down with her repeated breaths.

Shannon then proceeds to ask Hannah what she will do when Nonno passes away. Although the question initially gives Hannah pause, she states that she will continue to go on life, wandering the globe making paintings for tourists. Sensing a connection between the two of them, Shannon asks Hannah if she has ever had any romantic encounters. Reluctantly, Hannah admits that she lives a life of chastity—except for two instances where one man tried to molest her in a movie theater while another Australian man satisfied himself by holding one of her garments as they sat on a beach together. Hannah notes that the second incident made her feel embarrassed, but she never felt disgusted about the event. As Hannah gets ready to go pack, Shannon asks her if they could travel the world together; Hannah rejects his request, though, which makes Shannon realize that he is stuck with Faulk at the Costa Verde.

Continuing their conversation, Hannah tells Shannon that Faulk is a “morbidly jealous woman,” and that she needs to separate from Shannon for her own sake. The conversation is stopped by the fact that Hannah hears a repeated scratching noise under the verandah. Shannon then tells her that it is an iguana that Faulk has tied up with intentions of eating the animal. After a brief discussion, Hannah convinces Shannon to free the animal, which he eventually does. Once Shannon cuts the iguana free, he hears Nonno yelling from the hotel. When he rushes up to the verandah, he hears Nonno recite his new poem, one that he has been working on for years, without making a mistake or forgetting the words. Hannah, who is overcome with emotion, informs her grandfather that she will type up the poem in the morning, and she will help him publish his new work. Faulk, returning from inside the hotel, comes outside and asks Shannon if he would like to go swim in the moonlight with her; she then tells Shannon that she would like him to stay the hotel with him and help him run the hotel. Although he is reluctant at first, Shannon agrees with her, and they proceed down to the beach. The play ends with Hannah discovering that Nonno has died after he finished reciting his poem.