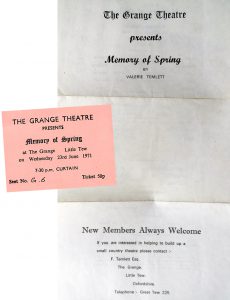 By a stroke of luck not only have a good number of  photographs survived from this very first show, but they were taken from within the auditorium by a once unknown person – a talented professional photographer called Graham Wilton came to mind. He was a good friend of ours in the early days, and took parts in both of Val’s adaptations of R.H. Blackmore’s book Lorna Doone in 1974 and again in 1995.

However, in July 2020 the archive received an e-mail from one Tina Vernon which solved the mystery and we’re very grateful to her for doing so. John Vernon, the man behind the camera, took the pictures during the final dress rehearsal and thus had the luxury of standing in the auditorium.

“A nostalgic reflection with music and verse.”  Set around the turn of the 20th century before the two World Wars changed society for ever, this show harkens back to those soon-to-be-lost days.

Click a photo to start the slide show. After 15 seconds the next image appears. To hurry through, click the right-hand arrow midway down the screen.To pause a photo, click the left-hand icon showing at the bottom centre of the screen (it then turns into a right-facing arrow – click it when you want to continue.) To exit the show, simply click on the tiny X at the top right of the black surround. Please use this information to control the slideshow when viewing photographs from all the other shows – thanks.

Photos from the show:

This first show was the culmination of frantic activity during the past year during which all concerned took a corporate leap into the dark and prayed for a soft landing! It’s an old saying but true, that “the paint was hardly dry”, and we were all quite surprised that the production, front-of-house, and back-stage organisation went as smoothly as it did. Oh, there were a couple of unforseen glitches (perhaps the funniest was having to round up the audience ready for Act II to start; during the interval many of them took their drinks from the bar area and headed out into the grounds to enjoy the warm summer evening, see the private side of the house, and explore the grounds. Little did we guess that would be quite commonplace in the future.)

And Val threw Fred into panic just before the final dress rehearsal by insisting a romantic bird house should feature on the set. Nothing daunted, our hero rushed into the garden and decapitated the one which for years had sat on a pole in the rose garden. It – to use a modern expression – “photobombed” at least two of the cast on set (see the Photos tab).

We also ran out of small change for the coffee and wine bars and – if memory serves – one evening saw a drain blockage from the gents’ loo, an up until then little-used toilet situated round the corner from the theatre patio. Originally built for the Grange’s four gardeners and used as a rest room and potting shed, this little building obviously had never been used quite so often in many years and its pipework had partially silted up. (Technical stuff – don’t ask!)

In a few years’ time a proper Gents’ loo was constructed out of the ‘back coal store’, a quite separate room in the same building as the Ladies, which necessitated digging up the patio to discover the sewer line from the gardeners’ loo and plumb in the new facility. The irony was that we were very proud of the Ladies (situated just a quick step across the theatre patio and freshly converted from a coal house!) because it reeked of fresh paint and flowers in the windowsill. Even had a carpet, whereas the early Gents was more of a walk around the end of the building and presented a more, um, utilitarian aspect until replaced by the later facility.

Ah, the glamorous life of the theatre…!