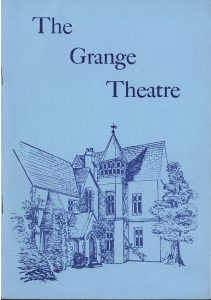 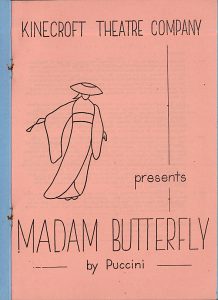 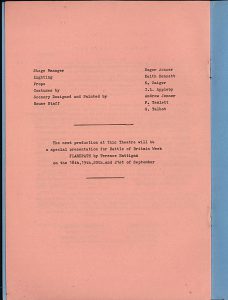 In 1904, a U.S. naval officer named Pinkerton rents a house on a hill in Nagasaki, Japan, for himself and his soon-to-be wife, “Butterfly”. Her real name is Ciocio-san (cio-cio, pronounced “chocho” [t͡ʃoːt͡ʃoː], the Japanese word for “butterfly”. She is a 15-year-old Japanese girl whom he is marrying for convenience, since he intends to leave her once he finds a proper American wife, and since Japanese divorce laws are very lax. The wedding is to take place at the house. Butterfly had been so excited to marry an American that she had earlier secretly converted to Christianity. After the wedding ceremony, her uninvited uncle who has found out about her conversion, comes to the house, curses her and orders all the guests to leave, which they do while renouncing her. Pinkerton and Butterfly sing a love duet and prepare to spend their first night together.

Three years later, Butterfly is still waiting for Pinkerton to return, as he had left shortly after their wedding. Her maid Suzuki keeps trying to convince her that he is not coming back, but Butterfly will not listen to her. Goro, the marriage broker who arranged her marriage, keeps trying to marry her off again, but she does not listen to him either. The American consul, Sharpless, comes to the house with a letter which he has received from Pinkerton which asks him to break some news to Butterfly: that Pinkerton is coming back to Japan, but Sharpless cannot bring himself to finish it because Butterfly becomes very excited to hear that Pinkerton is coming back. Sharpless asks Butterfly what she would do if Pinkerton were not to return. She then reveals that she gave birth to Pinkerton’s son after he had left and asks Sharpless to tell him.

From the hill house, Butterfly sees Pinkerton’s ship arriving in the harbour. She and Suzuki prepare for his arrival, and then they wait. Suzuki and the child fall asleep, but Butterfly stays up all night waiting for him to arrive.

Suzuki wakes up in the morning and Butterfly finally falls asleep. Sharpless and Pinkerton arrive at the house, along with Pinkerton’s new American wife, Kate. They have come because Kate has agreed to raise the child. But, as Pinkerton sees how Butterfly has decorated the house for his return, he realizes he has made a huge mistake. He admits that he is a coward and cannot face her, leaving Suzuki, Sharpless and Kate to break the news to Butterfly. Agreeing to give up her child if Pinkerton comes himself to see her, she then prays to statues of her ancestral gods, says goodbye to her son, and blindfolds him. She places a small American flag in his hands and goes behind a screen, cutting her throat with her father’s hari kiri knife. Pinkerton rushes in, but he is too late, and Butterfly dies. 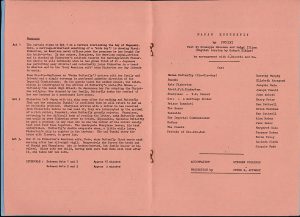 Please click on the image once to enlarge it, and then once again for the magnifying glass. 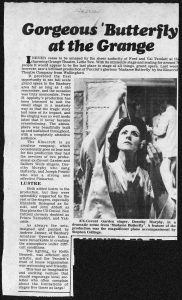 for this lighting person: during the ordering of the drinks’ bar’s contents prior to the show a mistake was made in the size and number of bottles of Guinness. Pints were ordered where half-pints were the norm (patrons downing a full pint might find themselves, er, rather ‘uncomfortable’ during the second Act – clambering across seated members of the audience en route for the gents was not to be encouraged!) and, to complicate matters, two crates (a dozen bottles each) had been ordered and delivered.

At this early stage in the theatre’s history there were still plenty of jobs to be either completed or initiated as we learned exactly what was needed, so the Guinness was a welcome thirst quencher.

But disaster struck on the final full dress rehearsal when the director (one Peter Appleby) asked me whether I’d ever lit a ‘proper’ opera. “No,” I told him, “I hadn’t.”

“The various lighting states during the show must meld seamlessly from one to another – no sudden changes – the music and singing is everything in opera,” Peter said.

Fair enough, but I wasn’t familiar with the plot and Peter told me to watch him as he sat in the front row during the rehearsal. Being full dress, that meant (obviously) the works when it came to costume, but also houselights off and stage lights on. All I would be able to see of him was a silhouette near the stage.

“When I raise my arms slowly,” I was told, “bring the lights up very gently. When I lower my arms, do likewise with the lights.”

Unfortunately two things conspired against the smooth running of the rehearsal. One; it was a swelteringly hot Sunday afternoon outside, while in the control room the 24 electronic dimmers were happily humming and throwing out even more heat along with two amplifiers: it was cozy. And two, Fred’s son Stephen was barman on the show and he had the bright idea to bring “a few” bottles of Guinness round for us to drink.

Which we did, rather too quickly, with the result that we were soon inebriated to the point of, shall I say, slight befuddlement.

Peering blearily through into the auditorium as the rehearsal progressed, I became aware of the director’s arms waving skywards with some urgency. Happily I responded, immediately flooding the stage with a blaze of light. The director’s hands clamped onto his head for a moment, then spread wide and made an urgent downwards movement. Faithfully I followed suite, plunging the bemused cast into gloom. Up went those blessed  arms again, provoking once more a full-on blast of light.

At that, Peter stormed out of the auditorium and we could hear raised voices between himself and Fred. Shortly afterwards, FGT’s heavy footsteps arrived outside the control room door, which opened and thus followed a very one-sided conversation during which Steve and I were called quite unkind epithets. I suppose we deserved it . . !