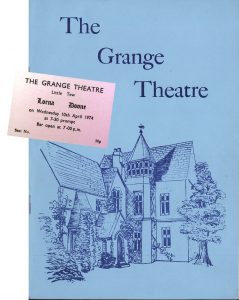 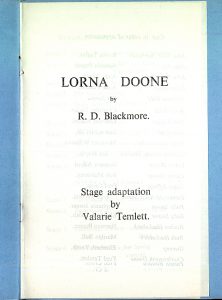 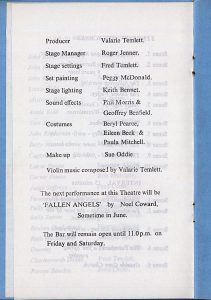 The story is set in the 17th century on Exmoor. John  Ridd is the son of a respectable farmer who was murdered in cold blood by one of the notorious Doone clan (a once noble family, now outlaws) in the isolated Doone Valley. Battling his desire for revenge, John also grows into a respectable farmer and takes good care of his mother and two sisters. He falls hopelessly in love with Lorna, a girl he meets by accident, who turns out to be not only (apparently) the granddaughter of Sir Ensor Doone (lord of the Doones), but destined to marry (against her will) the impetuous, menacing, and now jealous heir of the Doone Valley, Carver Doone. Carver will let nothing get in the way of his marriage to Lorna, which he plans to force upon her once Sir Ensor dies and he comes into his inheritance.

Sir Ensor dies, and Carver becomes lord of the Doones. John Ridd helps Lorna escape to his family’s farm “Plover’s Barrows”. Since Lorna is a member of the hated Doone clan, feelings are mixed toward her in the Ridd household, but she is nonetheless defended against the enraged Carver’s retaliatory attack on the farm. A member of the Ridd household notices Lorna’s necklace, a jewel that she was told by Sir Ensor belonged to her mother. During a visit from the Counsellor (Carver’s father and the wisest of the Doone family), the necklace is stolen from Plover’s Barrows. Shortly after its disappearance, a family friend discovers Lorna’s origins, learning that the necklace belonged to one Lady Dugal, who was robbed and murdered by a band of outlaws. Only her daughter survived the attack. It becomes apparent that Lorna, being evidently the long-lost girl in question, is in fact heiress to one of the largest fortunes in the country, and not a Doone after all. She is required by law, but against her will, to return to London to become a ward in Chancery. Despite John and Lorna’s love for one another, their marriage is out of the question.

King Charles II dies, and his illegitimate son, the Duke of Monmouth, challenges Charles’s brother James for the throne. The Doones, abandoning their plan to marry Lorna to Carver and claim her wealth, side with Monmouth in the hope of reclaiming their ancestral lands. However, Monmouth is defeated at the Battle of Sedgemoor, and his associates are hunted down for treason. John Ridd is captured during the revolution. Innocent of all charges, he is taken to London by an old friend to clear his name. There, he is reunited with Lorna (now Lorna Dugal), whose love for him has not diminished. When he thwarts an attack on Lorna’s great-uncle and legal guardian Earl Brandir, John is granted a pardon, a title, and a coat of arms by the king and returns a free man to Exmoor.

In the meantime, the surrounding communities have grown tired of the Doones and their depredations. Knowing the Doones better than any other man, John leads the attack on their land. All the Doone men are killed, except the Counsellor (from whom John retrieves the stolen necklace) and his son Carver, who escapes, vowing revenge. When Earl Brandir dies and Judge Jeffreys, as Lord Chancellor, becomes Lorna’s guardian, she is granted her freedom to return to Exmoor and marry John. During their wedding, Carver bursts into the church at Oare. He shoots Lorna and flees. Distraught and filled with blinding rage, John pursues and confronts him. A struggle ensues in which Carver is left sinking in a deep bog. Exhausted and bloodied from the fight, John watches Carver sink slowly to his death. He returns to discover that Lorna is not dead, and after a period of anxious uncertainty, she survives to live happily ever after. 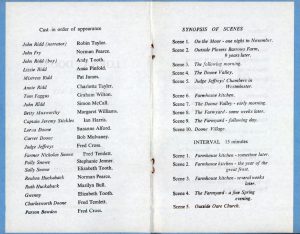 Our biggest show yet – 21 actors and fifteen scenes. Never mind the complex rehearsal schedule, by the end of each performance the stage crew were exhausted – and before going home, the poor saps had to re-set the stage ready for Act 1 the following evening! But look carefully and you’ll notice that actually there were only (only!) six sets with variations on the themes. Even so, there was some pretty nifty footwork and careful choreography needed to ensure swift strikes and builds between acts especially as all the flats and properties had to be stored as close to backstage as possible. The passages and nearby rooms were quite a sight…

Clippings from the local newspapers The Banbury Guardian and the Oxford Mail & Times. 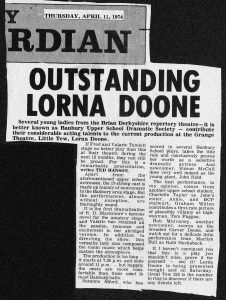 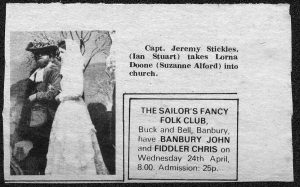 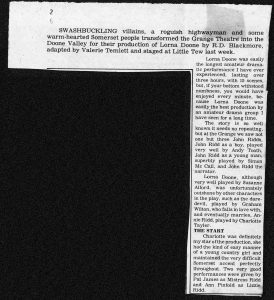 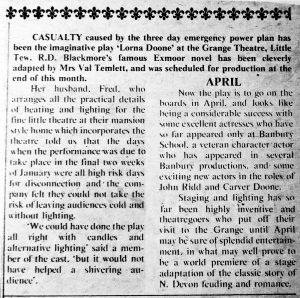 The action called for a farmhouse to be set on fire – an undertaking not to be considered on any stage never mind one so small as ours. However, by careful use of a split backcloth the glow of the fire could at least be shown as though emanating from a building just out of sight. To create the required effect, two stage lights were positioned such that when alternatively flickered, the dancing shadows did indeed look quite realistic.

In the early days we relied on advertising (later, word of mouth meant that the number of eager patrons became quite an embarrassment) and here’s a lovely poster but sadly the artist’s name is lost in the mists of time now. 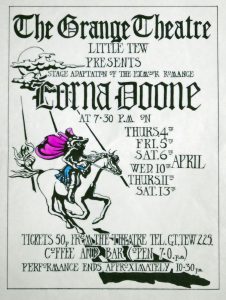