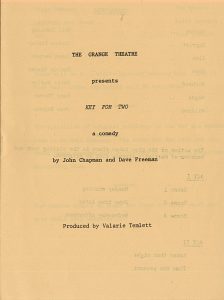 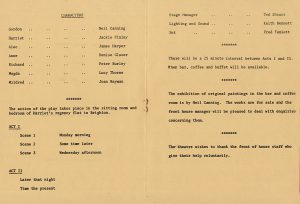 Harriet, comfortably set up in a Brighton flat, is ”entertaining” a married man named Gordon, who constantly complains about the high cost of maintaining a wife, a family and a mistress. A quick change of sheets and Alec arrives, a no-nonsense business man from Grimsby, who is something big in cod. He too has a problem with the cost of supporting a family as well as a mistress. Each man thinks he is the only one in Harriet’s life, and Harriet orchestrates their comings and goings with the artistry of a professional. Complications arise when Harriet’s friend Anne arrives unexpectedly, throwing Harriet’s dual timetable into disarray. Gordon and Alec both show up at the same time, and Harriet begins to create a fantastic story to explain each to the other.
Into the mix throw Anne’s alcoholic husband, unexpectedly arrived from New Zealand and who has long carried a torch for Harriet [too late, mate – join the queue], stir with a flourish and by the middle of Act Two you’ve forgotten who’s supposed to be married to whom and what stories have been invented to keep all the balls in the air.

These photos are screen shots from a VHS tape recorded on (then) state of the art equipment 35 years ago. So excuse the images, especially the thumbnails of the cast which were abstracted from the full-screen shot; they’re of considerably lower quality compared with today’s digital recordings but as no other photographs exist of this show, these are all we’ve got! Memories are so fragile . . .