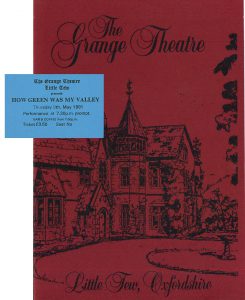 Synopsis of How Green Was My Valley 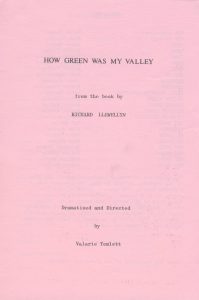 How Green Was My Valley is set in a Welsh mining village at the turn of the twentieth century and tells the story of the Morgans, a respectable mining family of the South Wales Valleys.  It is told through the eyes of Huw, the youngest son, and spans a period of some five years.  Huw’s academic ability sets him apart from his elder brothers and enables him to consider a future away from the dangerous coal mines.  His five brothers and his father are miners.  It is a colourful, often moving account of the events of Huw’s early youth spent in the Valley – events which as he recalls them on a spring day many years later, take on a particularly poignant significance for him, since he is about to leave the green Valley and its memories for good. 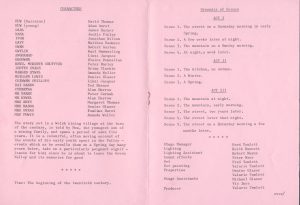 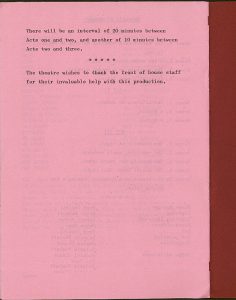 Another block-busting adaptation by Val from Richard Llewellyn’s classic story of life in a South Wales valley miners’ home. Rehearsals for smaller shows would often prove difficult to get all the actors together for one or two  evenings per week, but this “cast of thousands” (well, it felt like it sometimes!) tested Fred’s ingenuity to the full. In extremis some cast members would be not only rehearsing their own parts but ‘standing- in’ for absent colleagues too.

And bigger isn’t necessarily better when it comes to plotting the actors’ movements on our tiny stage, where it was so easy for one character downstage to inadvertently block the audience’s view of someone standing further upstage. Poor Val would have to try and set this slow-motion dance in her mind but would sometimes be carefully explaining to someone standing- in exactly where and when to move around the stage when the person to whom she should be addressing her instructions wasn’t even there!

The climax was an horrendous roof fall, the production of which required some very nifty work on the part of Peter Wroe on sound. A reel-to-reel tape deck held the pre-recorded sounds of specific miners as they yelled directions; a cassette tape deck ran the background noises of creaking timbers and rock falls, while a second one was held ready with that most moving of songs by the late Harry Secombe All through the night. Meanwhile, live on stage, the miners’ families were in the throes of despair whilst listening to the chaos. The sounds of the dying miners’ cries faded and the song would would gently build as the actors bowed their heads to the inevitable and the lights equally gently faded down to blackout.

As the cue commenced for the rock fall, I became aware of Pedro frantically shuffling cassette tapes around in the gloom. “What’s wrong?” I whispered.

And back came that unforgettable reply, “I’ve only gone and lost Harry bloody Secombe!

That occurrence neatly illustrates a strength of the reel-to-reel deck vs a cassette: with the former, a white chinagraph pencil mark could be put on the exact point in the tape where a cue would run through the playback head, meaning very precise cueing. The cassette, on the other hand, having its tape entirely enclosed, couldn’t be thus marked and the operator had to rely on the machine’s tape counter – always something of a moveable feast as the mechanics driving the counter could often give false readings.

And the other drawback – the one that almost tripped Pedro up that night – is that a cassette tape is capable of holding recordings on both sides. So, if a tape is inserted the wrong way round, the first the poor sap operating the machine knows about it is an entirely unexpected sound issuing from the speakers! By then, of course, the blessed counter would have advanced, so hurriedly removing the tape and turning it over is only the beginning of their woes – it has to be re-wound and the correct sound cue identified.

That’s precisely what had happened on this night. Naturally the action on stage couldn’t be halted while sound sorted himself out but – magically – Pedro managed to find H. Secombe Esq. in the very nick of time. As the curtains closed and I brought the houselights up, I could see poor Pedro quite covered in sweat at his close call!