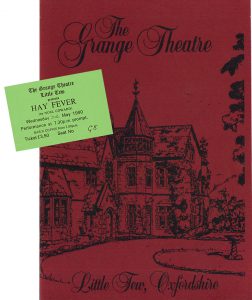 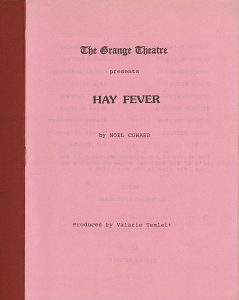 Hay Fever takes place in the comfortable, but untidy home of the charmingly eccentric Bliss family.  Judith is a retired stage actress for whom all the world is, indeed a stage; David is a novelist; their children are Simon and Sorel.  Simon and Sorel are dallying in the living room, exchanging insults about mutual friends and worrying that their mother is “up to” something, speculating that she has invited some “dreary, infatuated young man” to the house for the weekend.
Sorel is concerned about this possibility because she has invited Richard Greatham, an English diplomat, as her guest for the weekend.  Judith comes in from the garden and reveals that she has indeed invited a young man, Sandy Tyrell.  Simon adds to the mounting concern and hilarity by mentioning that he too has invited a weekend guest: Myra Arundel.  Finally, David comes downstairs from his study and adds one more visitor to the list; Jackie Coryton, whom he describes as a “perfectly sweet flapper.”

After more arguments and witty bantering, Judith announces that she has decided to come out of retirement and revive one of her greatest hits, ‘Love’s Whirlwind.’  As she and the children begin to perform on of their favorite scenes from the play, they are interrupted by the arrival of their guests.  In their blithely ill-mannered and unconventional way, the family members greet their visitors brusquely and leave them to make acquaintance and fend for themselves.

Following dinner, the Blisses and their guests decide to play a game of “Adverbs,” in which the players attempt to perform an action “in the manner of” an adverb.  For the Blisses the evening is full of sparkling witticisms and clever quips, but discomfort for their guests.

Once the game is concluded, the family members begin flirtatious liasions with their visitors, but not with the guest each invited.  Judith discovers David and Myra together, giving ample opportunity for more dramatics from the ageing actress.  The evening draws to an animated close as Judith, encouraged by her family, reprises scenes from ‘Love’s Whirlwind,’ much to the horror and consternation of the four houseguests.

The following morning, Jackie and Sandy reach the obvious conclusion that they are dealing with a family of lunatics, determining they should depart for London in Sandy’s car.  Meanwhile, the Blisses gather downstairs for breakfast.  David tries to read the final chapter of his novel, ‘The Sinful Woman’ to his family but is soon involved in an argument with Judith about the geography of Paris.  Simon and Sorel join the dispute, and eventually the whole family is once again heatedly arguing.  The guests use this moment of pandemonium to slip quietly away.  The oblivious family settles down to enjoy its breakfast and David continues reading ‘The Sinful Woman.’ 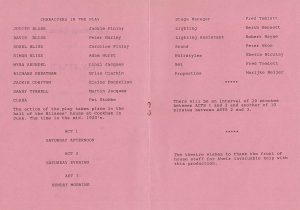 When I was asked to appear in Val’s production of Noël Coward’s “Hay Fever” at the end of 1989, it came as a complete surprise because I’d been out of the picture (so to speak) since 1981 when I appeared at the Grange in Val’s adaptation of “Camelot”.

I accepted at once, keen to be back at the renown theatre. The invitation couldn’t have arrived at a better time – I was recently returned from three years’ study at Bournemouth Poly and was working at Blackwells bookshop in Oxford pro-tem while I decided what to do with my life and career.

My sister Lindsay was also in the play, and the whole cast had such a good laugh rehearsing it during the winter and spring months; it was staged in late spring/early summer of 1990.

The production itself went smoothly, I thought, except for one night when another cast member, Caroline Finlay, reckoned she saw a ghost walk out of the wall in front of her in the ladies dressing room. There were a few jitters after that!

The colour photographs were taken of that production and the black & white shots a few months later in the autumn of 1990 [still to come -archivist] at a post-Hayfever social evening organised, as ever, by Fred and Val. 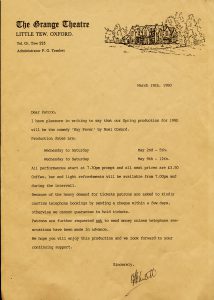