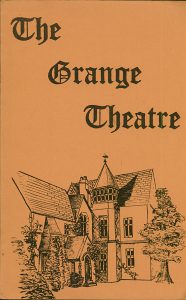 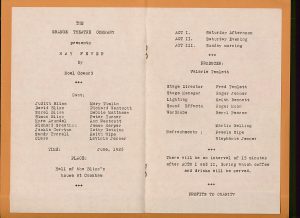 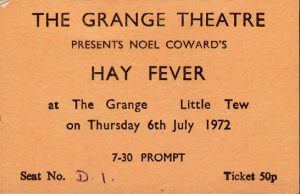 During clearing the Grange in preparation for sale, we found just this programme plus four photographs and a solitary ticket surviving from this particular show.  The production was so well received by our audience (only our fifth show since the theatre was opened) that it was repeated  three more times in later years.

Update – July 2020: we have just received around fifty photos of the production! They were taken by the late John Vernon and have now been sorted, scanned and inserted into the Photos tab of this page. When we posted those original four pictures, we never knew the name of the photographer, so that’s one more little mystery solved – forty-eight years later on !

The action is set in the Hall of David Bliss’s house at Cookham, Berkshire, on the banks of the River Thames.

Act I  A Saturday afternoon in June

Sorel and Simon Bliss, a brother and sister, exchange artistic and bohemian dialogue. Judith, their mother, displays the absent-minded theatricality of a retired star actress, and David, their father, a novelist, is concentrating on finishing his latest book. Each of the four members of the Bliss family, without consulting the others, has invited a guest for the weekend. Judith announces that she has decided to return to the stage in one of her old hits, Love’s Whirlwind. She and Sorel and Simon amuse themselves acting out a melodramatic passage from the play beginning, “Is this a game?” “Yes, and a game that must be played to the finish!” They are interrupted by the ringing of the doorbell.

Clara, Judith’s former dresser and now her housekeeper, opens the door to the first of the four guests, Sandy Tyrell, a sporty fan of Judith’s. The next arrival is the vampish Myra Arundel, whom Simon has invited. The other two guests arrive together: Richard Greatham, a diplomat, and Jackie Coryton, a brainless but good-hearted young “flapper”. Tea is served. Conversation is stilted and eventually grinds to a halt. The scene ends in total and awkward silence.

Act II  After dinner that night

The family insists that everyone should join in a parlour game, a variety of charades in which one person must guess the adverb being acted out by the others. The Blisses are in their element, but the guests flounder and the game breaks up. Simon and Jackie exit to the garden, Sorel drags Sandy into the library, and David takes Myra outside.

Left alone with Richard, Judith flirts with him, and when he chastely kisses her she theatrically over-reacts as though they were conducting a serious affair. She nonplusses Richard by talking of breaking the news to David. She in turn is nonplussed to discover Sandy and Sorel kissing in the library. That too has been mere flirtation, but both Judith and Sorel enjoy themselves by exaggerating it. Judith gives a performance nobly renouncing her claim on Sandy, and exits. Sorel explains to Sandy that she was just playing the theatrical game for Judith’s benefit, as “one always plays up to Mother in this house; it’s a sort of unwritten law.” They leave.

David and Myra enter. They too indulge in a little light flirtation, at the height of which Judith enters and finds them kissing. She makes a theatrical scene, with which David dutifully plays along. Simon rushes in violently, announcing that he and Jackie are engaged. Sorel and Sandy enter from the library, Judith goes into yet another bout of over-theatrical emoting. In the ensuing uproar, Richard asks “Is this a game?” Judith, Sorel and Simon seize on this cue from Love’s Whirlwind and trot out the melodramatic dialogue as they had in Act I. David is overcome with laughter and the uncomprehending guests are dazed and aghast as Judith ends the scene by falling to the floor as if in a faint.

Act III  The next morning

A breakfast table has been laid in the hall. Sandy enters and begins eating nervously. At the sound of someone approaching he escapes into the library. Jackie enters, helps herself to some breakfast and bursts into tears. Sandy comes out and they discuss how uncomfortable they were the night before and how mad the Bliss family are. When they hear people approaching, they both retreat to the library. Myra and Richard now enter and begin breakfast. Their conversation mirrors that of Sandy and Jackie, who emerge from the library to join them. All four decide that they are going to return to London without delay. Sandy agrees to drive them in his motor car. They go upstairs to collect their things.

Judith comes downstairs, asks Clara for the Sunday papers and begins reading aloud what the gossip columns say about her. The rest of her family enter. David proposes to read them the final chapter of his novel. Immediately, a minor detail about the geography of Paris is blown into a full-scale family row, with everyone talking at once about whether the Rue Saint-Honoré does or does not connect with thePlace de la Concorde, and hurling insults at each other. They are so wrapped up in their private row that they do not notice when the four visitors tiptoe down the stairs and out of the house. The Blisses are only momentarily distracted when the slam of the door alerts them to the flight of their guests. Judith comments, “How very rude!” and David adds, “People really do behave in the most extraordinary manner these days.” Then, with no further thought of their four tormented guests, they happily return to David’s manuscript and to what passes for their normal family life.

Our stage manager on this show was the wonderful Roger Jenner, his wife Vinnie was in the show (she was later to play – to great acclaim – the part of Madame Arcarti in Noël Coward’s comedy Blithe Spirit in 1977 and again in 1988) and their son Andrew served on front-of-house. Andrew’s just reminded me of a wonderful story which unfolded during the rehearsals and public performances for this show. Fred had been happily brewing home-made beer in a large blue plastic dustbin (a clean one, we hoped) which he kept just off-stage in the dark corner beneath a work surface very near to the Aga in order for its radiant heat to promote the brewing process. A lid was fitted to keep the warmth in. Social smoking was back then considered quite normal and indeed the ‘action’ on-stage required some actors to indulge.

Andrew’s mum Vinnie (who played the maid in this production) was tasked during the intervals and after the final curtain each evening in emptying those practical ashtrays. She’d noticed the blue bin, assumed it was for rubbish and so would take them into the kitchen lift the bin’s lid slightly (the close proximity of the work surface above precluded any clear view within) and drop the cigarette butts inside.

A while after the show closed, Fred decided the time was ripe to try the nectar; he lifted the lid away – to be confronted by a turgid sludge comprising flat beer and dozens of fag ends. It would be an understatement to describe his emotions as ‘disappointed’ and he never did discover the culprit!

Apart from the theatre itself, Fred & Val wondered whether an art gallery would be a Good Idea to complement it. There were a number of talented local artists who were always on the lookout for such a venue, so it was decided to try and ‘test the waters’, as it were. This poster was displayed around the area in the hope of attracting patrons. 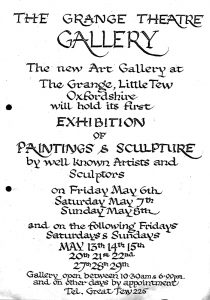 How gratifying, then, that so many people came during the six days of the show, and also visitors telephoning for appointments to view during the day. (In retrospect it must be admitted that the majority jumped at the chance to see inside the Grange for the first time; nonetheless it was sound publicity for us and laid the foundations of the theatre. After the first year of shows, folk were also keen to inspect that part of the house, which was itself also open to public view.)

This writer had only just previously taken over a small Picture Shop in Banbury and, as I was involved in creating the theatre, decided it wouldn’t hurt if the shop, too, might benefit. Happily, it did! 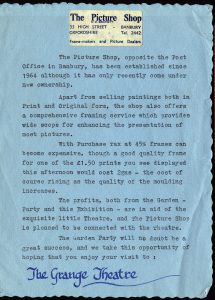