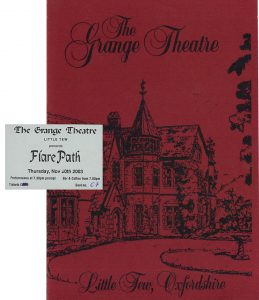 We put this production on in November and greeted a number of patrons who’d seen and enjoyed it on previous occasions. It was sobering to witness some of the older RAF ‘boys’ leaving the auditorium at the end reduced to tears. Part of the action involved a heavy bomber crashing on the airfield and viewed by the cast from a window in the pub where the action of the play took place.

We re-used the sound effects which a previous engineer (Graham Rousell) had compliled with such care and attention to aural veracity. The droning of the crippled aircraft, its spluttering engines, the awful silence and the steadily increasing glow of its pyre made for devastating reality.

Although we weren’t to know it at the time, this was to be the third and final time we’d be delighting our audiences with this evergreen play. 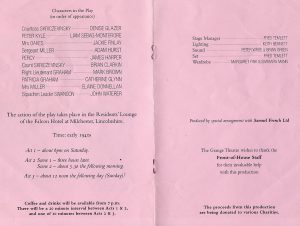 At the Falcon Hotel on the Lincolnshire coast, men from a nearby RAF airbase are planning to spend the weekend with their wives. Patricia Graham, an actress from London, has something to tell her husband Teddy, who is a bomber pilot. The situation is complicated when Peter Kyle, a Hollywood film star, arrives at the hotel, and Teddy is sent out on a night raid over Germany. Patricia is torn between a rekindled old flame and loyalty to the husband who relies on her for support.

Patricia and Peter had a love affair before she met Teddy, but she left because Peter was not free to marry her. Patricia married Teddy after a “whirlwind wartime romance” while he was on a week’s leave. She does not know her husband very well, and she was still in love with Peter when they wed. She reconnected with Peter in London and now plans to tell Teddy she is leaving him, but she is annoyed by Peter’s unexpected arrival at the hotel. Peter tells her that his career is waning as he gets older and that he needs her.

Teddy’s tail gunner Dusty Miller is awaiting his wife Maudie, who is late. Maudie only has a short time off from the laundry where she has had to work since the war began. She was bombed out of their home in the Blitz, but she says matter-of-factly: “…there’s a war on, and things have got to be a bit different, and we’ve just got to get used to it – that’s all.”

Doris waits for her husband Count Skriczevinsky, a Polish pilot serving with the Royal Air Force. His wife and son were killed by the Nazis, and he came to Britain, despite his poor command of the English language, to join the war against Germany. Doris met him while working as a barmaid, and though she is now his Countess, she worries about what will happen when the war is over and he is able to return to Poland.

Also present at the hotel are the proprietor, Mrs. Oakes; Percy, a young waiter who is interested in RAF operations; and an airman named Corporal Wiggy Jones.

Soon after everyone has arrived, Squadron Leader Swanson summons the men back to base for an unscheduled night operation, and their wives are left behind to await their return. Swanson, who is affectionately called “Gloria” by Teddy, remains at the hotel. As Patricia and Swanson look out at the flare path from the hotel window, one of the planes is destroyed on takeoff by the Luftwaffe. Doris and Maudie come downstairs while Swanson calls the airfield and learns that the plane did not belong to any of their husbands.

At 5:30 a.m., Teddy and Dusty return from the mission, but Count Skriczevinsky is missing in action. Teddy confesses to Patricia that he’s losing his nerve. His plane was hit and he was responsible for bringing his six crewmen back home. He knew his crew trusted him but he was terrified, and he tells Patricia she was the only thing that kept him going. Patricia has a change of heart and decides to stay with Teddy. She tells Peter, “I used to think that our private happiness was something far too important to be affected by outside things, like war or marriage vows…” but that “beside what’s happening out there; … it’s just tiny and rather – cheap – I’m afraid.”

Doris asks Peter to translate a letter written in French that the Count left for her in case anything happened to him. In the letter, the Count says he loves her and wishes he could have taken her to Poland after the war. Doris asks if Peter made that part up, but Peter tells her he did not. Peter intends to tell Teddy everything but changes his mind and departs. Count Skriczevinsky returns safely and is reunited with Doris.

Clicking on any image will open the lightbox, with a set of controls on the lower edge. Hovering the mouse over the controls will show a brief description:

A tongue-in-cheek security form (during the war, every person staying at a non-permanent address was obliged to fill in a form, though nothing like this one!). 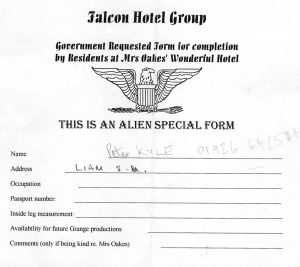 Liam’s character, Peter Kyle, had obviously thought better of filling it in after the first couple of lines  . . .