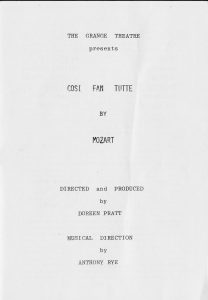 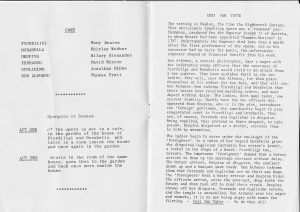 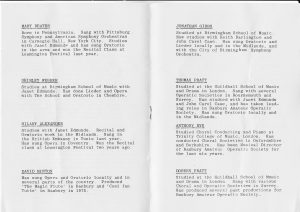 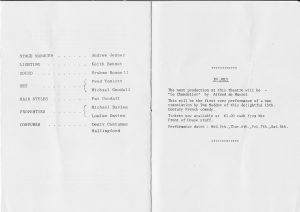 In a 17002 Napolese café, Ferrando and Guglielmo (two officers) express certainty that their fiancées (Dorabella and Fiordiligi, respectively) will be eternally faithful. Don Alfonso expresses skepticism and claims that there is no such thing as a faithful woman. He lays a wager with the two officers, claiming he can prove in a day’s time that those two, like all women, are fickle. The wager is accepted: the two officers will pretend to have been called off to war; soon thereafter they will return in disguise and each attempt to seduce the other’s lover. The scene shifts to the two women, who are praising their men (duet: Ah guarda sorella—”Ah look sister”). Alfonso arrives to announce the bad news: the officers have been called off to war. Ferrando and Guglielmo arrive, brokenhearted, and bid farewell (quintet: Sento, o Dio, che questo piede è restio—”I feel, oh God, that my foot is reluctant”). As the boat with the men sails off to sea, Alfonso and the sisters wish them safe travel (trio: Soave sia il vento—”May the wind be gentle”). Alfonso, left alone, gloatingly predicts that the women (like all women) will prove unfaithful (arioso: Oh, poverini, per femmina giocare cento zecchini?—”Oh, poor little ones, to wager 100 sequins on a woman”).

Scene 2: A room in the sisters’ home

Despina, the maid, arrives and asks what is wrong. Dorabella bemoans the torment of having been left alone (aria: Smanie implacabili—”Torments implacable”). Despina mocks the sisters, advising them to take new lovers while their betrotheds are away (aria: In uomini, in soldati, sperare fedeltà?—”In men, in soldiers, you hope for faithfulness?”). After they leave, Alfonso arrives. He fears Despina will recognize the men through their disguises, so he bribes her into helping him to win the bet. The two men then arrive, dressed as mustachioedAlbanians (sextet: Alla bella Despinetta—”Meet the pretty Despinetta”). The sisters enter and are alarmed by the presence of strange men in their home. The “Albanians” tell the sisters that they were led by love to them (the sisters). However, the sisters refuse to give in. Fiordiligi asks the “Albanians” to leave and pledges to remain faithful (aria: Come scoglio—”Like a rock”). The “Albanians” continue the attempt to win over the sisters’ hearts, Guglielmo going so far as to point out all of his manly attributes (aria: Non siate ritrosi—”Don’t be shy”), but to no avail. Ferrando, left alone and sensing victory, praises his love (aria: Un’aura amorosa—”A loving breath”).

The sisters are still pining. Despina has asked Don Alfonso to let her take over the seduction plan. Suddenly, the “Albanians” burst in the scene and threaten to poison themselves if they are not allowed the chance to woo the sisters. As Alfonso tries to calm them, they drink the “poison” and pretend to pass out. Soon thereafter, a “doctor” (Despina in disguise) arrives on the scene and is able to revive the “Albanians”. The men, pretending to hallucinate, demand a kiss from Dorabella and Fiordiligi (whom the “Albanians” call goddesses) who stand before them. The sisters refuse, even as Alfonso and the doctor (Despina) urge them to acquiesce.

Despina urges them to succumb to the “Albanians”‘ overtures (aria: Una donna a quindici anni—”A fifteen year old woman”). After she leaves, Dorabella confesses to Fiordiligi that she is tempted, and the two agree that a mere flirtation will do no harm and will help them pass the time while they wait for their lovers to return (duet: Prenderò quel brunettino”—”I will take the dark one”).

Dorabella and the disguised Guglielmo pair off, as do the other two. The conversation is haltingly uncomfortable, and Ferrando departs with Fiordiligi. Now alone, Guglielmo attempts to woo Dorabella. She does not resist strongly, and soon she has given him a medallion (with Ferrando’s portrait inside) in exchange for a heart-shaped locket (duet: Il core vi dono—”I give you my heart”). Ferrando is less successful with Fiordiligi (Ferrando’s aria: Ah, lo veggio—”Ah, I see it” and Fiordiligi’s aria: Per pietà, ben mio, perdona—”Please, my beloved, forgive”), so he is enraged when he later finds out from Guglielmo that the medallion with his portrait has been so quickly given away to a new lover. Guglielmo at first sympathises with Ferrando (aria: Donne mie, la fate a tanti—”My ladies, you do it to so many”), but then gloats, because his betrothed is faithful.

Dorabella admits her indiscretion to Fiordiligi (È amore un ladroncello—”Love is a little thief”). Fiordiligi, upset by this development, decides to go to the army and find her betrothed. Before she can leave, though, Ferrando arrives and continues his attempted seduction. Fiordiligi finally succumbs and falls into his arms (duet: Fra gli amplessi—”In the embraces”). Guglielmo is distraught while Ferrando turns Guglielmo’s earlier gloating back on him. Alfonso, winner of the wager, tells the men to forgive their fiancées. After all: Così fan tutte—”All women are like that.”

The scene begins as a double wedding for the sisters and their “Albanian” grooms. Despina, in disguise as a notary, presents the marriage contract, which all sign. Directly thereafter, military music is heard in the distance, indicating the return of the officers. Alfonso confirms the sisters’ fears: Ferrando and Guglielmo are on their way to the house. The “Albanians” hurry off to hide (actually, to change out of their disguises). They return as the officers, professing their love. Alfonso drops the marriage contract in front of the officers, and, when they read it, they become enraged. They then depart and return moments later, half in Albanian disguise, half as officers. Despina has been revealed to be the notary, and the sisters realize they have been duped. All is ultimately forgiven, as the entire group praises the ability to accept life’s unavoidable good times and bad times.