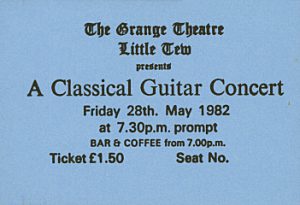 “For two nights only…” these concerts were given by David Taplin and Peter Wiltschinsky, with music expressly written for two guitars by Carulli, Sor, Castelmoro-Tedesco, Guiliani and Absil.

They were well received but admitted afterwards in the bar that being so very near to the audience meant that their playing techniques were being studied very closely indeed by a number of people there who obviously weren’t themselves strangers to the instrument!