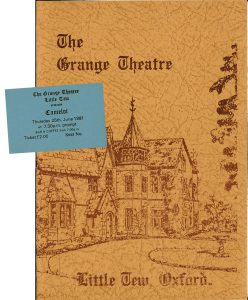 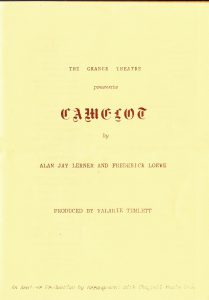 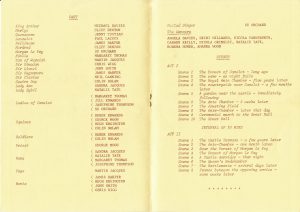 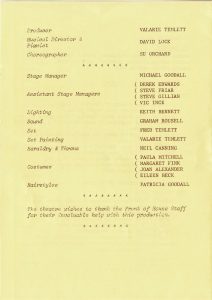 King Arthur is nervous about his upcoming arranged marriage and is hiding in a tree. Merlyn the Magician and his wise tutor, calls Arthur down to warn the young king that he must learn to think for himself. Merlyn, who lives backwards in time and remembers the future as well as the past, knows he will soon be separated from Arthur. Merlyn persuades Arthur to climb down and chides him for his unkingly behaviour. Arthur then left alone, ponders both his subjects and his own feelings about the intended nuptials (“I Wonder What the King is Doing Tonight?”). Arthur hears someone coming and scampers back up the tree again.

Guinevere, Arthur’s intended bride, comes to the woods. She does not like the idea of being Queen, preferring to live an ordinary life, (“Simple Joys of Maidenhood”). She stumbles into Arthur, who initially calls himself “Wart” (his childhood nickname) and then, hearing of her reluctance to marry, tells her of the joys of life in Camelot (“Camelot”). It is love at first sight, and they almost kiss, but are interrupted when Arthur’s attendants come upon the two of them. He is revealed as the King. He tells Guinevere the story of how he pulled the sword from the stone and became king, and she finally agrees to marry him. The wizard Merlyn is amused by this development, but his joy turns to sorrow as his memories of the future begin to fade. He realizes that Nimue, a beautiful water nymph, has come to draw him into her cave for an eternal sleep (“Follow Me”). He begs Nimue for answers, as he has forgotten if he has warned Arthur about two important individuals, Lancelot and Mordred. His memories fade permanently, though, and he is led away.

Five years later, Arthur sits with Guinevere in his study, debating about what to do. He explains that he wishes to create a new kind of knight—one that does not pillage and fight, but tries to uphold honour and justice. He is eventually inspired, with Guinevere’s help, to establish the Round Table with the motto “Might for Right.” Five years later, Arthur’s idea has led to the Knights of the Round Table being renowned all over the country, and their fame has even spread to France. A young, pretentious and over-religious Frenchman from Joyous Garde named Lancelot du Lac has heard of the Round Table, and is determined to come to Camelot and join Arthur’s knights, confident that he is perfect for the post, (“C’est Moi”).

King Pellinore, an elderly man who was a friend of Arthur’s family, also comes to Camelot to witness Arthur’s greatness for himself, and it later seems that he has become part of the family. Guinevere organizes a May Day festival on the castle grounds (“The Lusty Month of May”), where Arthur introduces his wife to Lancelot. Guinevere takes an instant dislike to Lancelot. Time passes, and he makes an enemy of most of the knights. Guinevere incites three of them; Sir Dinadan, Sir Sagramore and the burly Sir Lionel, to challenge him to a joust, (“Then You May Take Me to the Fair”). Arthur (who, unlike everybody else, is friendly with Lancelot), is dismayed by this, and is at a loss to understand a woman’s way- though he cannot be angry with Guinevere, (“How to Handle a Woman”).

In the jousting match Lancelot easily defeats all three knights. He wounds Sir Lionel, who fights him last, so badly that the crowd thinks he is dead. But the dismay of the crowd turns to awe as Lancelot’s distraught cries for Sir Lionel to live seemingly resurrect a dead man. Reflecting the adoration of the crowd, Guinevere finds herself falling in love with Lancelot. She does not wish to violate her marriage vows, however, and wishes Lancelot would leave Camelot (“Before I Gaze at You Again”). By some unfortunate twist of fate, Lancelot, in spite of his boasts that he is immune to pleasures of the flesh, is also madly in love with Guinevere, and is similarly torn by the conflict between this love and his devotion to Arthur. Arthur makes Lancelot a Knight of the Round Table. As it happens, the shrewd King Arthur guesses that Lancelot and Guinevere have feelings for each other, but hopes it will blow over, as he does not wish to upset the tranquility of Camelot. He soliloquizes to his sword Excalibur, that they will rise to the challenges they will all face, together.

Many years later, Guinevere and Lancelot are still tormented by their unfulfilled love. She tries to get rid of him, but Lancelot will not leave her, (“If Ever I Would Leave You”). They both believe that Arthur is not aware of it. Nevertheless, she remains faithful to Arthur, and helps him in carrying out the affairs of State.

Mordred, Arthur’s illegitimate son, comes to Camelot to dishonor the King and tries to gain the throne for himself. Arthur puts him in charge of the knights’ training programme, not knowing that Mordred is there to destroy the Round Table in revenge against Arthur for abandoning him, and detests the idea of being a Knight (“The Seven Deadly Virtues”). Arthur begins to feel the strain of ruling England, and both he and Guinevere wonder what commoners do without any such responsibilities (“What Do The Simple Folk Do?”).

Mordred, meanwhile, has devised a plan to ruin Arthur and his kingdom permanently. He enters an enchanted glade where his aunt, the sorceress Morgan le Fay, dwells in an invisible castle. Morgan has a sweet tooth, and though she likes Arthur, Mordred manages to bribe her with a large supply of sweetmeats, to build one of her invisible walls around Arthur for one night, so that when he goes on his hunting trip the next day, he will not be able to get back to the castle (“The Persuasion”). Meanwhile, Mordred incites the Knights to remember their former days of fighting and pillaging, and turns them against Arthur, (“Fie On Goodness!”). With Arthur gone, Lancelot, unable to stop himself, visits Guinevere in her chambers, as Mordred fully suspected he would. They kiss passionately (“I Loved You Once in Silence”). However, Lancelot and Guinevere’s affair and Mordred’s machinations come to a head when Mordred and some of the Knights of the Round Table interrupt the pair, accuse Lancelot of treason, and try to take him prisoner. Lancelot fights them off and escapes, but Guinevere is arrested, tried, found guilty of treason by reason of her infidelity, and sentenced to be burned at the stake (“Guinevere”).

At the execution, Arthur watches from a distance as Mordred taunts him for his failures; he is torn between upholding his law and doing his duty as a king, or sparing Guinevere, whom he still loves in spite of everything. At the last moment, Lancelot arrives with an army, rescues Guinevere and takes her off with him to France. But in the process, Lancelot has been forced to kill some of the other knights, leaving the survivors vowing revenge.

For the sake of his own honour and that of Camelot, Arthur must now wage war against Lancelot. Mordred has taken up his own army against Arthur, back in England. The war takes a terrible toll on Camelot, as more than half of the Knights of the Round Table are killed. Before the final battle, Arthur meets Lancelot and Guinevere. Lancelot and Guinevere’s relationship has foundered, doubtless because of their guilty consciences. Guinevere has become a nun, and the Round Table is now broken. They offer to face up to justice in England, but Arthur will not see Guinevere burned or Lancelot beheaded. He forgives them both, and they depart separately. That night in camp, Arthur meets a young stowaway named Tom of Warwick, who has come to join the Round Table. His speech reminds Arthur of the idealism and hope that he had as a young king, and inspires him. Arthur knights Tom, and sends him back to England to grow up there, that he might pass on to future generations the ideals of chivalry and Camelot (“Camelot” (reprise)).


As usual, click to start; click the II button bottom left to pause, and > to continue.  After the passage of 30 years, memories for names are understandably a little vague. Any help would be appreciated. 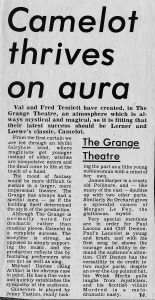