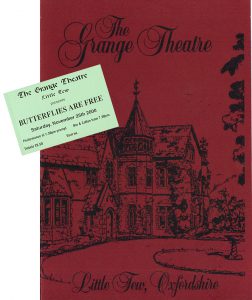 Synopsis of “Butterflies are Free” by Leonard Gershe

The title of this play was inspired by a passage in Charles Dickens’ Bleak House: “I only ask to be free. The butterflies are free. Mankind will surely not deny to Harold Skimpole what it concedes to the butterflies.”

Young Don Baker, is the hero of his mother’s children’s book series, “Donny Dark” and has been blind since birth, with his overprotective mother following his every move.  Don finally decides to take his own apartment in Manhattan and pursue his song-writing ambitions.  It’s all he wants; a place of his own away from his mother, and his controlling and judgmental widowed mother Florence has reluctantly agreed.    Don’s new living arrangement is on a two-month trial basis with Mrs Baker agreeing not to visit Don within that time period.  Mrs Baker is convinced that Don’s trial is doomed for failure.

One month into the trial, free spirited nineteen-year old Jill Tanner moves into the apartment next door to Don.  The two have an instant rapport, so much so that they decide to unlock the door that joins their two apartments together.  Previously married for six days when she was sixteen, Jill admits that she is not a commitment type of person, and the two decide just to have fun together. Their relationship however seems to be moving into one that is more committed.   Don learns the kind of things from Jill that his mother would never have taught him! And Jill learns from Don what growing up and being free is really all about.  The situation grows tense when Ralph Austin, Jill’s boyfriend, enters the scene.

Surprising Don with a visit, Mrs. Baker sees that Don has attached himself to Jill. She fears that Jill will break Don’s heart and she tries to talk her out of Don’s life.  But Jill has strong feelings for Don and tells Mrs. Baker that if there is someone who should get out of Don’s life, it is she.  As Mrs Baker leaves, she admits to Don that he has changed and that she must adjust to ‘not being needed any more.’  Don and Jill sit on the floor for a ‘picnic’ and the play ends on an upbeat note of hope and happiness. 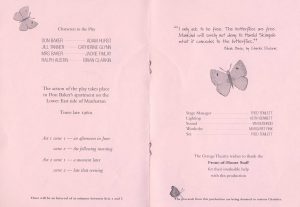 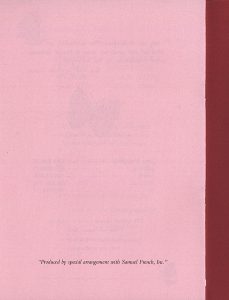 Clicking on any image will open the lightbox; op right “x” closes it.

With our thanks, Adam Hurst provides his memories of playing Don Baker…

“Butterflies Are Free”. This must rate as one of my all time five favourite plays to have appeared in. To play a blind, American folk singer (and I think largely pull it off) was a fantastic experience. I found myself “seeing” things in a different light. How would you pour a glass of wine if you couldn’t see how much was in the glass? How would you move around a room? Are your reactions learned through sight, or instinctive (I still don’t know the answer to that one).

All this and more, on top of which I had to play guitar, sing (a little) and carry off a midwest American accent. Luckily I was on stage with three other fabulous actors who made the task that much easier. Brian Clarkin played Ralph Austin, the brash and perhaps slightly boarish theatre producer. Now that’s real acting, as Brian is as far removed from that character as you can get. Then there was my mother, Mrs Baker (never did find out her first name) played by Jackie Finlay. Fabulous as always, I loved acting with Jackie. Completely professional, funny and compassionate in equal measure. And finally, Catherine Glynn (now Jenkinson) in her first production at the Grange as my girlfriend Jill Tanner. Again, a wonderfully giving and professional actress and an absolute joy to work with. Happy days!