So – a show’s been chosen and is in rehearsal. Wise counsel says give it a few weeks to see if things look promising and, if so, then it’s time to sell tickets. In our early days advertising was imperative but, with funds low, newspapers were avoided and home made photocopied posters were pinned to unsuspecting telegraph poles near the shops in local villages. Word-of-mouth quickly became our strength, first via those kindly folk who were either involved in the show’s production or the unsung and anonymous heroes who manned the coffee urns and the bar plus the ushers and the car-parking chaps (all collectively termed “front-of-house staff”, without whom the theatre could never have prospered).

Their friends were intrigued at this hive of activity taking place in what had been, after all up until then, a large and mostly invisible private house to which very few people had intimate access. Ten bob for a ticket was an irresistable entrée to this curious world (and the famously low prices of the drinks was an added bonus!)

A plan of the auditorium was drawn up (and photocopied ad infinitum) which showed the seating onto which the ticket holders’ names and contact phone numbers could be entered. When a booking came in, the applicant was asked to send a cheque in order to reserve the seat(s) and usually the physical ticket(s) awaited collection by the owner on the night in question. 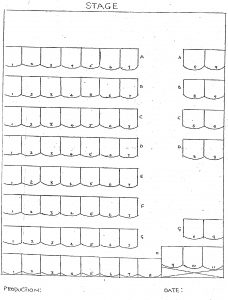 With just 70 seats available overbookings became inevitable and Fred would ask the disappointed enquirers if they’d like to leave their phone number in case of cancellations. As these often occurred within an hour or two of curtain-up Fred was sometimes stuck on the phone trying to resell the abandoned seats at a time when he should properly be either meeting & greeting his patrons or -on big shows – helping backstage. Just before the curtain rose, the phone in the kitchen would be taken off the hook to avoid any possibility of the thing ringing during an act and ruining the atmosphere. Sometimes we forgot…

Those early shows ran for four nights – Wednesday to Saturday (two dress rehearsals, one on Sunday afternoon, the next on Monday evening; Tuesday “off” for any late adjustments) – and admittedly the first couple were undersubscribed but the aforementioned Front-of-Housers were rounded up and sent to fill empy seats in the auditorium so that, as Fred famously put it, “The actors wouldn’t feel lonely, old boy.” Amusingly, at the interval bell those same Shanghaied audience members had to scramble get to their posts in order to serve the ‘proper’ audience.

Members of the audience now began enquiring whether they could join “the mailing list” for information on forthcoming productions. The mailing list – what mailing list? Now there’s a clever idea. Another 50p to cover the postage for a year (they were the days!) helped swell the coffers and two card index boxes plus contents were purchased (no computerised spread sheets back then…) 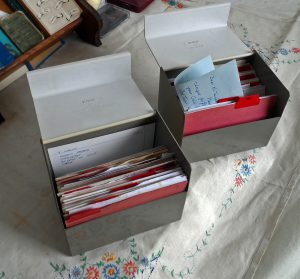 A mailing letter would be written, photocopied, folded and put in envelopes with a stamp. The sleepy postbox in Little Tew would suddenly find itself quite literally stuffed with first dozens and, later, hundreds of letters – all of which had to be dispatched at the same time so that every patron had the same chance of receiving theirs the next day. Here’s one such – Terence Rattigan’s Flare Path which was staged in 2003. 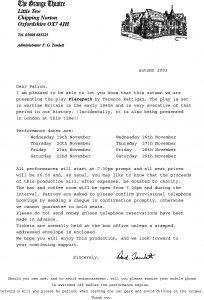 But as the years – and our popularity – increased, this mailing list became a rod for Fred’s back. Once the letters began landing on doormats, the telephone in the kitchen started its insistent ringing and it became quite usual for a show to be sold out within just a few days. Those poor saps who for whatever reason didn’t read their letter upon receipt would call to book, only to receive the unwelcome news that there were no suitable tickets left. And some quite forcefully told the unhappy ticket office that their ten bob (sorry, 50p) was beginning to look like poor value. What to do? Couldn’t easily enlarge the theatre so the idea of running for a second week was born. And in fact most of us accepted that: the work involved in preparing for a show – in whatever way – was pretty much the same for one week as for two: we’d “just” end up doubly tired at the end of the run.

And so the years passed. Patrons came from near-by and far afield (one family regularly made the trip from South Wales) and many forged happy friendships with Fred and Val. Patrons began haunting the bar after the performance ended in the hope (usually gratified) that they’d be able to mingle with the cast after the show. The weekday nights could sometimes drag on towards midnight as patrons were content to prop the bar up and natter – it could sometimes be a tad embarrassing if they had to be (politely) asked to leave. (“I’ve got a good mind to turn up in my pyjamas, old boy!” Fred once muttered as a particularly stubborn crowd didn’t take his hints.) Those in the know would aim for last night tickets because word had got out that pretty spectacular Last Night Parties would be thrown and they might strike lucky. But no – the tantalising aromas of food emanating from the kitchen were strictly for the cast and crew.

Those parties would last well into the early hours especially if more adventurous food was prepared. Naturally nothing could be heated until the curtain came down – after telephones ringing, cooking smells came a close second as unwelcome intrusions into a performance – and so once the patrons had left, tables and chairs with cutlery re-arranged in the bars, there could be quite a wait for the grub. All we could do was settle in for a few drinks until it turned up. It was hell, but someone had to do it!

It became a matter of honour, for those willing to return to the house the following morning for the Great Washing Up, that the place was a hive of activity by ten o’clock even if hangovers were prevalent. Not just the public areas needed clearing of plates, cutlery and glasses, but mysteriously glasses were often found in sometimes quite remote rooms. This writer always knew there’d be two wine glasses (one with lipstick) at the top of the house in the tower room… and I never did figure out who their owners were although I had a good idea! If the show was a summer one the search area had to be expanded outdoors. Imagine the magical atmosphere of a warm summer’s moonlit evening and a gentle walk in the grounds after several hours’ hard work in a dark and hot theatre. If only they’d returned their blessed glasses . . .  After the first couple of years (when we’d hired glasses from Hook Norton brewery, suppliers of our drinks during our entire history) Fred became so cross at having to pay for lost ones that he invested in one hundred and always claimed it saved him a measureable amount of cash.