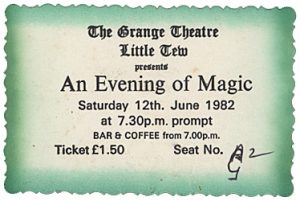 Banbury-born Graham Anker has from childhood been interested in magic and he became an accomplished magician, a member of the Magic Circle and at one time President of the Leamington and Warwick Magic Society. He has performed at many local functions and charitable events around the north Oxfordshire area, some years giving as many as 60 performances.

Amusingly, he suffered the same close scrutiny this evening as had the two guitarists on a show the previous month and, as a practitioner of the slight-of-hand arts, found it a little unnerving having the audience only a few feet away!