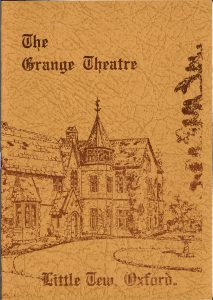 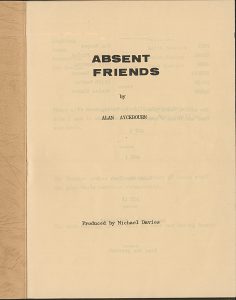 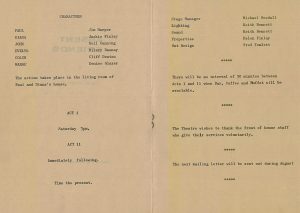 Absent Friends takes place in real time in the lounge of Diana and Paul’s house.

Diana has organised a tea party for Colin, an old friend of her husband Paul. Colin’s fiancé has recently drowned and the aim is to cheer him up with a gathering of old friends Paul, John and Gordon. Gordon is, typically, ill and his wife Marge turns up instead, while Paul and John are less than enthusiastic about the party.

All this hides deep problems: Paul has had a brief affair with John’s wife Evelyn – who has brought her baby to the party and is dismissive of Paul’s love-making; Marge is desperate for a child of her own and has transferred her maternal instincts onto an increasingly dependent and accident-prone Gordon; Diana is desperately unhappy, misses her children who are at boarding school and is bullied by Paul – who she suspects of having a major affair with Evelyn; John is aware of Evelyn’s affair, but is dependent on Paul for employment. Both John and Paul are so uncomfortable with the idea of meeting Colin that they play down their friendship to the point of almost non-existence.

The majority of this emerges before Colin has even arrived and just as matters threaten to erupt, the man himself turns up and everyone awkwardly tries to both be nice to him and to get on with each other. But all have seriously misjudged Colin, who is seriously happy. He is blissful in the memory of the time he spent with his fiancée; annoyingly happy in fact. His apparent satisfaction with his life, despite his loss, merely highlights the depths to which all those around have sunk and his attempts to sort out their problems merely creates further rifts in the already damaged relationships of the other couples.

Colin is largely oblivious to everything deteriorating around him and finally recalls that Paul once secretly took one of Diana’s handkerchiefs, when they were first in love. Paul reveals he still has it… and uses it to clean the car. Diana, practically at the edge anyway, snaps and pours a jug of cream over him before breaking down in front of everyone, recalling how she longed to be a Canadian Mountie when young. She is sedated and Colin departs, secure in his own memories – leaving all the others isolated and alone.

Oh, this is rich, it really is. The only photo we thought we had was a photo of a painting produced tongue-in-cheek by a now-professional artist, Neil Canning. No pictures of the actual cast whatsoever!

For the after-show party Neil (who played John in the show) brought along his imagined portrait of the always-absent and always-accident-prone Gordon, someone  who’s often referred to in the script but who never actually materialises.

Considering Gordon’s usually ill, it must only be assumed that it can’t be the result of over-exercise, a healthy diet or any sort of  worry!

HOWEVER, a video of the production has surfaced, and the following gallery holds a selection of stills from it. This video – and around 20 others – had been kept in a damp cupboard at the Grange for many years; they all suffered from mould and damp but amazingly a professional company managed to partially recover the show, although both the sound and vision left a lot to be desired. It’s all we’ve got, though . . .