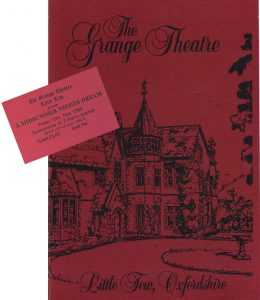 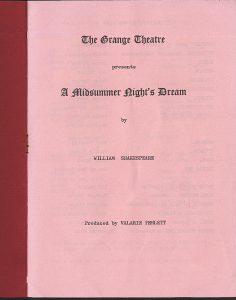 Duke Theseus and Hippolyta are preparing for their wedding, when Egeus arrives with his daughter Hermia, along with Lysander and Demetrius. Hermia and Lysander love each other; but Egeus wants Hermia to marry Demetrius (who is loved by Helena). Theseus insists that Egeus must have his way, and gives Hermia a month to marry Demetrius, or either die or become a nun. Hermia and Lysander decide to run away and to meet in the forest. Hermia tells Helena of their plans, and she in turn tells Demetrius, in the hope that he will like her more for telling him. Demetrius chases after the eloping couple, and Helena chases after him.

A group of tradesmen meet to discuss a play on the theme of Pyramus and Thisbe which they want to perform at Theseus’ wedding. They plan to rehearse in the forest.

Oberon and Titania, the king and queen of the fairies, are arguing over who should have a changeling boy that Titania has stolen. Titania will not give him up, so Oberon takes his revenge by having his servant Puck find a special flower whose juice he will squeeze onto Titania’s eyes while she is asleep. This will make her fall in love with the first person she sees upon waking. Oberon, seeing Demetrius reject Helena, tells Puck to put the potion on Demetrius’ eyes also. But Puck mistakes Lysander for Demetrius, and Lysander wakes to see Helena, whom he falls in love with and chases after, leaving Hermia alone.

The rustics begin their rehearsal near where Titania is sleeping. Puck places the head of an ass on Bottom. This frightens his friends away, and in doing so wakes Titania; she therefore falls in love with him, and Bottom is treated like a lord by the fairy retinue.

Hermia, having lost Lysander, thinks Demetrius has killed him, and when he denies it she goes to look for him. Oberon is furious with Puck for his mistake and tells him to find Helena and bring her to him. Oberon squeezes the flower onto Demetrius’ eyes while he sleeps. Lysander enters with Helena, begging for her love, telling her Demetrius does not love her; Demetrius then wakes, sees Helena, and begs for her love. Hermia enters and is snubbed by Lysander, while Helena thinks all three are tricking her.

Demetrius and Lysander challenge each other to a duel. Oberon gets Puck to imitate the two men’s voices, leading them around until they fall asleep. Puck puts an antidote on Lysander’s eyes so that he resumes his love for Hermia.

Oberon then releases Titania from her spell, having received the changeling boy from her and Puck removes the ass’s head from Bottom.

Theseus and Hippolyta arrive to hunt in the forest, along with Egeus, where they discover the sleeping lovers. They hear their story, and Theseus decrees they shall be married as they wish, despite Egeus’ will.

Bottom is reunited with his friends, and they rehearse their play, which has been selected as one of those to be made available as entertainment at the wedding. After supper, Theseus chooses their play, which is presented in front of an audience of all the lovers. They all retire to bed, and Oberon and Titania enter to sing and dance; Oberon blesses the three couples, and Puck is left to address the audience. 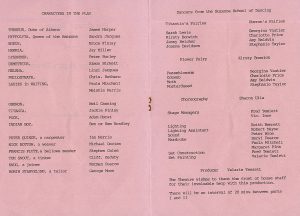 This was the second time “the Dream” was performed at the Grange and for this production Val was determined to outshine even our first offering in 1977. To that end the main curtains were entirely removed and in order to bulk out the man-made scenery (a load-bearing “tree” was erected up-stage centre into which Puck had to be able to ascend) considerable amounts of real greenery from the gardens were brought in to create a rustic woodland which ‘escaped’ the normal confines of stage and proscenium arch. Entwined within the ferns, the boughs of laurel, elder and larger bushes were beautifully-made satin flowers which made a spectacular set, in the centre of which was Titania’s bower.

Needless to say, the production was very well received. During one interval, when many of the audience had taken the usual opportunity to escape into the ‘real’ gardens, one chap passed through the auditorium en route for the gents. Us techies were enjoying some well-deserved liquid refreshment on that warm mid-May evening (we were sitting in our usual dimly-lit control room, pretty much invisible except by close examination of our two windows) when we noticed the patron return.

His route took him from the patio foyer, down the auditorium and across the front of the stage. Here he paused, looked around to see what he assumed to be a deserted room  and then skipped up onto the stage where he dropped to one knee, threw out an arm in a theatrical gesture and beamed at his imagined audience.

Because the main tabs were gone, and to invoke a little mystery into the set, Val had elected to leave it in relative gloom – the houselights were held down at around 70% – with just one tight-focussed spotlight illuminating a spray of flowers up-stage centre. Very nice it looked, too…

Anyhoo, mischief raised its wicked head and quick as a flash I reached up, extinguished the houselights to plunge the unfortunate patron into darkness, and then brought all the stage lights up to full. Poor man, he looked like a rabbit caught in a car’s headlights (but rather more brightly-lit).

I kept them up for less than three seconds before equally rapidly extinguishing them and snapping on the houselights. Our dazzled and unnerved victim unsteadily returned to the auditorium and vanished bar-wards, probably for a fortifying stiff drink. But at least he’d enjoyed a stage career even if it was rather short . . .