Fred and Val were surprised to receive a formal request from the organisers of the above Festival who hoped they could use the theatre and its services for their 1980 Drama Festival featuring  acting enthusiasts belonging to the various Groups which comprised the Oxfordshire Women’s Institute.

The format was for four short playlets from those different Groups to be performed on each of three evenings in front of other members. Adjudicators would vote on that evening’s winner, give reasoned criticism on the performances and announce the winning Group. On the fourth evening the winners would once again perform their plays – this time for friends and family.

Fred wasn’t obliged to man the ticket office; the W.I. themselves organised the ticketing. We did offer them a drinks bar but, if memory served, they preferred the idea of our coffee bar instead. So, no income for us, then . . . but technically we still had some work to do. Although they supplied their own rudimentary scenery and Stage Managers for the shows, we naturally supplied the sound and lighting for them.

Graham was on the sound board and solemnly received the cassette tapes from each director (quite varying in recording quality, it had to be admitted). We also received the scripts and these were annotated with sound and lighting cues where necessary. Us two in the control room had no rehearsals – we had to wing it as best we could on the nights.

Graham struggled with the sound cues’ numbering system because every cassette deck’s mechanical numerical counter tended to have slightly differing timings; thus “Cue number 4, counter 165” on the deck upon which the sound effects had been recorded might, played back on a different deck, appear at – for example, 158 or 169 or somewhere in between. He perforce had to hurriedly run through the cues and add the theatre’s own deck’s counter readings to those in the script before the show commenced. 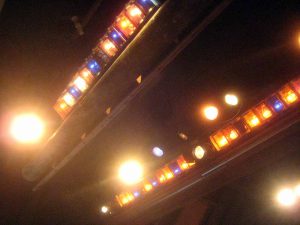 On lights, my job was theoretically easier; our standard lighting rig was set for general stage illumination but the batons (the long lengths of 100 watt bulbs each within a ‘window’ which held coloured gels) were wired such that I could call ‘straw’ (a clear light which enhanced colours and makeup but not dramatically); ‘gold’ (doing what it says – added much more warmth to a set); and ‘dark blue’ (useful for cooling a scene or, indeed, creating a moonlit look to the proceedings). The  three colourways thus gave me a wide range of moods to play with depending on the requirements of the script.

This meant of course that I had to continually follow the book about one page ahead of the action to catch any marked cues.  Thus “a summer’s evening, time 8pm” was a doddle but on one particular show Graham and I were much alarmed to hear on stage an actor unexpectedly commenting about an “approaching thunderstorm”.

Hurried consultations in the script gave no clue as to when the storm should break and with no thunder effects on the tape in question we, not wishing to let the cast down, responded in the only way possible – a slow lowering of the lights to give that gloom which precedes a storm. I added a few quick flickers of lightning to help set the mood. Imagine then our consternation to hear one of the actors peering from the set’s window and cheerfully announcing that the storm had passed them by, and what a wonderful sunset she could see . . .

None of the casts had ever been ‘backstage’ at the Grange (their rehearsals had all taken place in members’ homes with any sets blocked out on the carpets in chalk) and so were unprepared for the general layout of the house out of sight of the stage and they had no opportunity for a rehearsal with us.

Although second nature to the regulars, the apparent warren of rooms, corridors and dead ends forming the ground floor of the Grange proved something of a trap for the unwary. And unlike most theatres, we had three stage entrances, each of which had to be approached via different routes!

On one memorable evening the action determined that an actress left the stage upstage left (into our kitchen) while gaily telling the other two actors remaining on stage that she was “just nipping outside for a moment”. Sadly the script called for her to return via another entrance almost immediately and the poor girl found herself in the unlit (and perforce dark) corridors backstage with no clear heading nor even an idea of where the upstage right entrance might be.

Moments passed: the audience heard frantic pattering of feet passing tantalisingly close to backstage but never materialising. Eventually a mournful wail was heard as she pleaded with the S.M. to be rescued. Happily the audience thoroughly enjoyed the little diversion but I think the adjudicator made a note for his comments.

But we all had fun and indeed we gained quite a  number of new patrons from those four evenings’ productions. Sadly we have no photographs of what turned out to be quite a hectic few days.