It’s difficult at this remove to remember that, apart from the volunteers staffing the theatre, hardly anyone over the years had the opportunity to explore the grounds. The house was pretty well obscured from public view apart from glimpses of its rather forbidding northern aspect which faced the village lane as one passed by. (This side held the service quarters and a late addition to the house which once held storerooms with a small nursery above.) The approach driveway rising, as it does at the time of writing, towards the house from the main gate in a gentle right-hand curve beneath mature chestnut trees ensured the eastern view of the building only gradually opened out. A thickset wood on the inside of the curve preserved the mystery until the very last moment, when at last the old house revealed itself.

To the left of the approaching visitor were the five acres of garden in which nestled a small orchard, many specimen shrubs, mature trees and several ornamental ponds, nicely set off by six lawns from which led a number of secluded grass pathways twining through the grounds. On a balmy summer’s evening, how tempting was all that!

On the western border an archery had been formed, allowing people to stroll its entire length sheltering beneath the large trees planted to protect the grounds from westerly gales. (Fred once observed that perhaps Edwardian ladies, when tiring of aiming their arrows at the straw targets, might fix targets to the gardeners instead and give them a couple of minutes’ start!) From this (south) side the house presented a wonderful picture – picturesque even – and this is where the family rooms are situated.

Straight ahead, the Grange stood with a quiet air of welcome – and this was the aspect most familiar to our patrons. In spring the southern grounds could be tantalisingly glimpsed before the summer leaves obscured the view and discreetly drew a veil across them. In autumn the riot of colour from the careful planting made an enticing picture. In winter, however, the shows’ performances during the dark evenings meant the house presented a rather different image. Blazing with light from many windows and from the two huge carriage lamps lighting the driveway, the Grange itself became a theatrical setting, especially if the rooks (we had one of the largest, oldest rookeries in north Oxfordshire) were busy cawing “goodnight” to each other in the darkness. Most atmospheric.

Small wonder, then, that during the intervals of summer productions many of the patrons would collect their drinks and “go exploring”. This would exasperate Fred because, of course, they would need rounding up before Act II could begin, and could be pretty much anywhere in the grounds. And that took time which was better spent (on many of the shows) in setting the new scene.

However, the prospect of investigating what at any other time were very private and secluded gardens usually proved too great for the occasional visitors, and who could blame them (apart from Fred!). Almost all of us lived in considerably smaller, often much younger, buildings with very limited gardens so naturally the opportunity of seeing how “the other half” once lived was taken with gusto. There were other snags apart from misplaced souls: the mowers were not capable of collecting the grass clippings, but merely strewed them across the freshly-cut lawns. And the grounds themselves – often very wet with muddy areas – meant audience members returning from their perlustrations would have shoes and boots depositing grass and soil onto the house’s carpets. This would mean extra work before the next evening’s performance in order to brush and vacuum the detritus away. 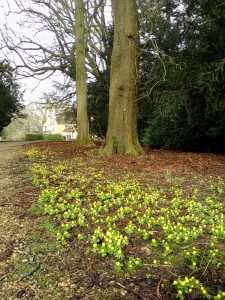 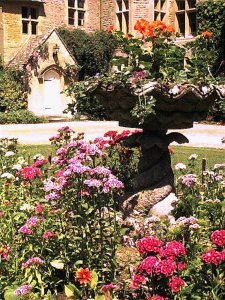 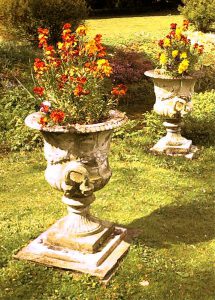 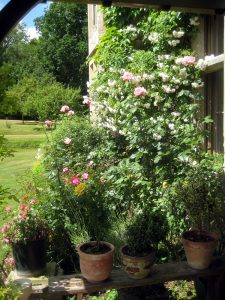 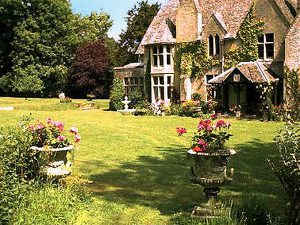 There was an up-side to all this, though, and Fred was quite susceptible to admiring comments regarding his lovely home and its unique position. Suddenly all the angst seemed worthwhile (until the next load of patrons vanished…) and so he soldiered on, happy that he was continuing to care for the Grange and its gardens as the earlier owners envisaged. 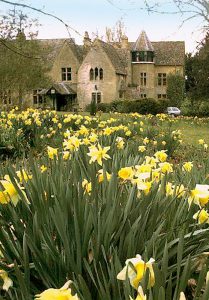 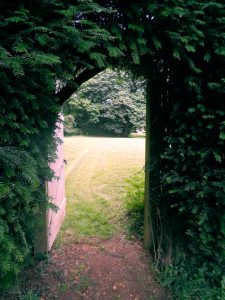 The discerning reader may have noticed that all the above is written in the past tense: quite naturally in respect of the now-vanished theatre of course, but sadly at the time of writing (early 2018) this writer is informed by locals who regularly take their dogs for walks in the fields bordering the Grange’s property that the grounds stand denuded of many of their mature trees, while the majority of the specimen shrubs have been torn out along with the surrounding undergrowth. Where once were enticing glimpses down green pathways and across quiet lawns is currently a desolation of felled trunks, tree stumps and mounds of wood chippings. No doubt many of the older trees were past their sell-by date but it does mean that, along with the theatre itself, there remain now only precious memories of what once had been. 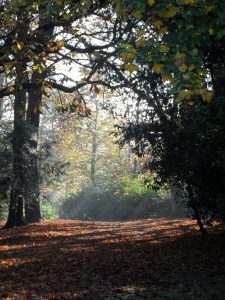 That the Grange’s new owners have their own plans for the property naturally cannot be denied them, and it can only be hoped that in another few decades peace will again re-visit this once-magical place.