It’s my sad duty to record the passing (3rd March 2018) of a stalwart of our Grange Theatre, Peter Wroe (known as ‘Pedro’ to his friends) after a monumental battle with illness – in fact, he survived prostate cancer for over 16 years and was one of the longest sufferers to do so, providing his consultants with years of vital research data from a number of important clinical drugs trials for which he volunteered.

He “did sound” for very many shows and I was privileged to share the control room (“on lights”) with him for all that time. As an ex-Post Office engineer he was used to thinking problems through, sometimes coming up with solutions nobody elst had dreamed of. He had the happy knack of being able to count seconds very accurately – something some sound cues needed. Equally, though, he would never leave an actor hanging in suspense if their cue didn’t arrive precisely on the dot and thus he was loved and trusted by all those on the stage. 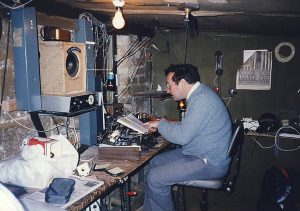 Jeff Benfield was our first sound engineer, followed by Roger Moon. Gordon Bowen was next, followed by Graham Rousell; then Daniel Nightingale before Peter took his turn. Later on Peter (after handing over to Ian Bushrod) became a key member (main contact and Chairperson) of the team recording the Talking Newspaper tapes for the blind and partially sighted people within the Banbury area.

Our thoughts and sympathy go to his wife Margaret and the family.