A grievous loss to our little company was Fred Cross, a consummate actor with a memorable countenance and an impressive memory capable of absorbing characters in scripts ranging from high comedy to Shakespearean drama, in the latter of which he was a rock upon which other cast members could rely on to guide them through sometimes troubled waters. 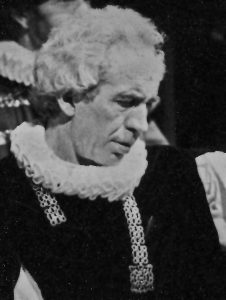 Fred also had a sharp sense of humour and, if addressed by his full name, would reply innocently, “Is he?” And on those shows necessitating entry at the back of the auditorium he, along with others of the cast, would quietly squeeze into our control room for a while to watch the show as their cues approached. (It was quite surreal to have, for instance, an apparent member of a high-born family of Verona whispering the most toe-curlingly rude jokes in our ears one minute and, the next, sweeping majestically into the auditorium in full Shakespearean flight!)

He rests in the churchyard of Duns Tew, his home village.   R.I.P Fred.