The archive has just regurgitated several photographs from – at a guess – the mid-1950s when Fred and Val lived at Great Haseley, a little village about five miles from Thame in south Oxfordshire and some 25 miles from their eventual home in Little Tew.

Three photos survive of their home; I recall Fred saying their thatched roof was just next door to the village blacksmith, whose forge would shower sparks into the air if the bellows were being used over-enthusiatically. Nerve-wracking times for the neighbours! At this time I believe Fred was working for a motor engineers in south Oxford although he wasn’t there for very long; the war injury to his leg prevented him from heavy lifting or, indeed, kneeling – prerequisites for that sort of job.

Even then the pair of them were, it seems, involved in amateur dramatics (‘amdrams’, to use a colloquial term) and we have two images dating from that time. The first one shows Val ensconsed in a fairy carriage with Fred on coachman’s duties and bemused villagers looking on. The photo is annotated “Cinderella coach“, which rather gives the clue as to the forthcoming show. 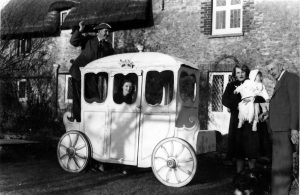 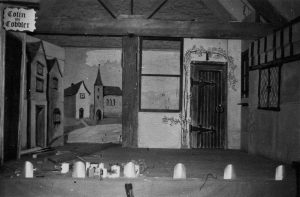 Photo number two depicts the interior of – I guess – Great Haseley village hall with a stage not that much smaller than the Grange’s. This photo’s annotated “Beauty & the Beast” and, again, must date to the mid-’50s. I suspect the scenery would have been painted by Val – it bears her skill at capturing perspective on a very shallow depth, something which became a trademark at the Grange.

You’ll notice the footlights across the front of the acting area (seemingly no elevated stage as such). Given the absence of any other stage lighting on the set, I suspect the foots contained candles – quite usual for country village halls lacking much in the way of equipment (indeed, often, not even electric light). Val was very disappointed at my refusal to have foots at the Grange, candle-powered or otherwise, because actors up-lit from them looked quite grotesque (we’re used to seeing things lit from above whether it be in natural daylight or interior lighting). It’s okay for scarey horror scenes but not for much else! The other problem with such a restricted light source were the huge shadows thrown onto the backcloth, effectively ruining any semblance of realism.

Finally – amazingly – a programme for Beauty and the Beast, and two tickets for Cinderella have survived for over 60 years! 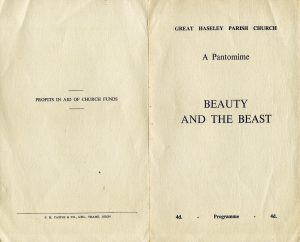 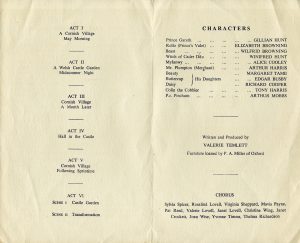 Curiously, the Saturday performance was sold at 2/6d (half-a-crown) or 12p in modern money, whereas what appears to be the previous evening’s was a shilling extra; usually,  Last Nights attracted a higher price. One explanation might be that the pink ticket referred to a show held in a later year, when production costs may just have been that bit higher. We’ll never know . . . One thing’s for certain, though. Within just two or three years Fred and Val had bought the Grange, so Great Haseley’s loss was Little Tew’s gain! 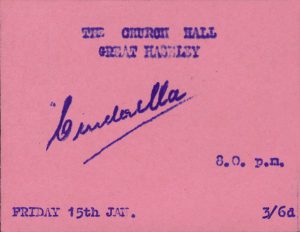 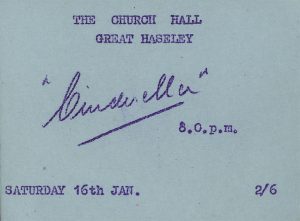 If you, dear reader, are of a ‘certain age’ you may recall the spirit-based “Banda” table-top duplicating machine, a small beast of uncertain temperament which was hand-cranked and did sterling service amongst those who couldn’t (or wouldn’t) run to the expense of patronising a local printing company. These two tickets were certainly produced on one, and this writer can still bring to mind the sharp ‘tang’ of the spirit needed to transfer the ink to the paper. 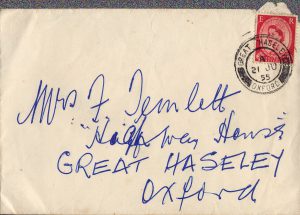 Finally, this addressed envelope has turned up in the archive; worth saving, I think, not only for the  – um – forceful characterful handwriting but also for the fact the correspondent posted it in Great Haseley for an address in Great Haseley. Seems a waste of 2½d (equals one penny in today’s 2018 coinage) to my mind.